Published - Reaching Into the Past to Build Future Success 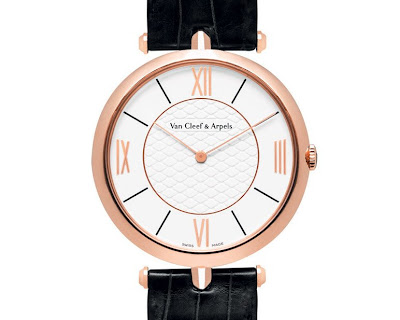 Van Cleef & Arpels is known in the watch world for its whimsical and bejeweled timepieces like those in its “Poetic Complications” collection, but the Parisian company has also returned to a simpler era by rereleasing the slim, elegant Pierre Arpels watch.


The Pierre Arpels is actually a contemporary interpretation of the PA49, a round quartz watch designed in 1949 by Pierre Arpels, the nephew of the company’s founders, Alfred Van Cleef and Estelle Arpels, for his own use. The watch was eventually commercialized and sold to the general market in the 1970s, and then reworked in different versions, including one with a square face.

The original watch, just 5 millimeters, or 0.2 inches, thick, featured a white dial with a slightly matte finish, hours marked in Roman numerals, and two simple black batons for the hands. The distinctive design had twin central supports to secure the dial to the black leather strap, instead of the usual lateral attachments.

The 2012 version inspired by this classic keeps the central supports, giving the impression that the round dial is suspended in space. It also retains the Roman numerals, but the center of the dial is now adorned with a honeycomb motif that the company says recalls a black-tie shirt pattern. The crown is set with a diamond. The new version is slightly thicker, at 5.79 millimeters, to accommodate the mechanical movement.

The Pierre Arpels profile is slightly beveled, while the black alligator patent leather of the bracelet is now manually glued, doing away with visible stitching. The mechanical manual-winding watch is equipped with a Piaget 830 P movement, similar to that in Piaget’s Alpino.

In an interview at Van Cleef’s office in Paris, Pamela Egeileh, the product manager for Europe, the former Soviet republics and the Middle East, noted that while the PA49 had continued to sell over the years, it was not really a typical Van Cleef offering.

“This is really the first very simple masculine collection we’ve launched in a long time,” she said. “It is what was missing in our collection. We didn’t really have a watch for men that was very simple.”

Yannis Casse, Van Cleef’s wholesale manager for Europe, said that retail buyers at the watch salon last month said they saw the watch as having a wide appeal to both men and women because its dial comes in two sizes, 38 or 42 millimeters, and can be set with diamonds encircling the dial.

Wei Koh, the Singapore-based editor of the watch magazine Revolution, said that he believed the watch’s classical design and slim profile expressed a more global resurgence of neoclassical aesthetics in watchmaking, motivated by the idea that in times of economic uncertainly people want to buy things that will endure.

He called the Pierre Arpels an “example of a brand intelligently reaching into its past to write what will undoubtedly be its future commercial success.” The watch will also appeal to Chinese consumers, he added, an increasingly important luxury market.

Blending such storytelling with timekeeping has been the foundation of Van Cleef & Arpel’s “Poetic Complications” collection since its beginnings in 2007. 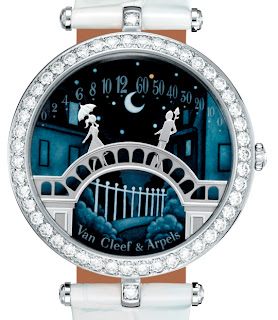 By mixing richly decorated enameled dials with the use of automatons, the French jeweler has burnished its high-end watchmaking credentials while offering whimsical romantic tales.

This year, its “Poetic Wish” watches, in versions for men and women, display romantic scenes of the Eiffel Tower and Notre Dame. Introduced last month in Geneva at the Salon International de la Haute Horlogerie, Van Cleef & Arpels has gone one step further with technology on these watches by creating a minute repeater timepiece with an unconventional movement. The hammer striking the hours and minutes sits vertically in the middle of the ring-shaped gongs, instead of being adjacent to the dial. 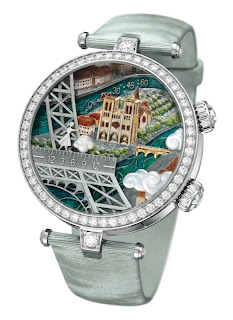 They strike two spiral shaped gongs, one for the hours and the other for five minutes. Five patents have been filed for this repeater movement, which was conceived by Jean-Marc Wiederrecht and his team at Agenhor, an independent Geneva-based atelier specializing in mechanical modules for movements of prestigious watch brands.

As the romantic Parisian scenes unfold through 3 automatons, the animation comes to life thanks to the pusher at 2 o’clock which also triggers the five-minute repeater.

On the Lady Arpels Poetic Wish, the silhouette of a young woman moves slowly from the left to the center of the dial to indicate the exact hour. She is on a ledge of the Eiffel Tower, with Notre Dame Cathedral in the distance.

A second automaton, a mother-of-pearl cloud, moves toward her. When the two meet, the bells of Notre Dame ring out to strike the hour. A kite then appears from behind the cloud and flies across the sky to indicate the minutes. 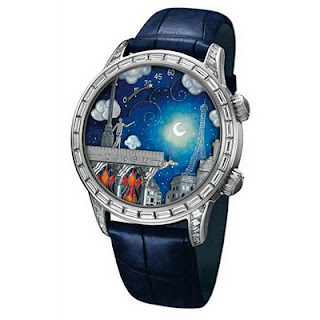 For the dial of the men’s watch, the Midnight Poetic Wish, a young man standing on a terrace of Notre Dame moves toward the center.

A diamond shooting star appears from behind the mother-of-pearl cloud flying across the sky to indicate the minutes. His moonlight view is of the Eiffel Tower, and the ledge where his beloved awaits.


This story was first published in the IHT on Feb 21