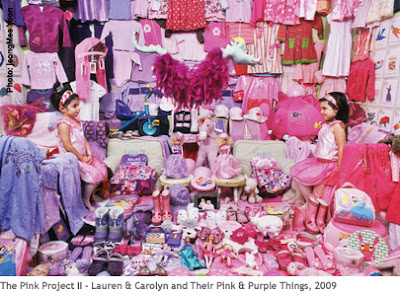 
The work is part of a larger series, The Pink and Blue Project that explores the way most little girls and boys, across various ethnic groups, regardless of their cultural background seem to love pink and blue clothing, accessories and toys. It is also of course a commentary on children's consumerism today and gender identity. .

The Project was initiated by her five-year-old daughter, who loves the color pink so much that she wanted to wear only pink clothes and play with only pink toys . The artist noticed that this was similar with other children. regardless of their cultural backgrounds. Perhaps it is the influence of pervasive commercial advertisements aimed at little girls and their mummies , such as Barbie and Hello Kitty merchandise that has developed into a modern trend. Girls train subconsciously and unconsciously to wear the color pink in order to look feminine.

Pink was once a color associated with masculinity, considered to be a watered down red and held the power associated with that color. The change to pink for girls and blue for boys only actually happened after World War II.

The artist has also noticed that as girls grow older, their taste for pink changes toward purple... Later, there is another shift. However, the original association with the color-code often remains.