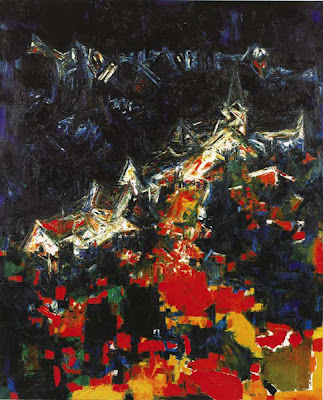 One of the most significant paintings by Sayed Haider Raza ever to appear on the market - Village With Church from 1958 - will be among the highlights of Sotheby’s March Asia Week sales in New York. The painting was purchased by Mr. and Mrs. John D. Rockefeller III from the landmark 1958-59 exhibitionTrends in Contemporary Painting In India and remained in their historic collection until 1994.


Raza spent a considerable portion of his career in France, first arriving in 1950 and still today maintaining a studio in the south of France. He was deeply moved by the works of the European modernist masters, particularly Cézanne and van Gogh, and his works from this period echo the structure and formalism of both of these artists.

Receipt of the prestigious Prix de la Critique in 1956 afforded Raza both international recognition and the freedom to leave Paris and travel throughout his adopted homeland. Throughout the 1950s, Raza painted the landscapes of Europe in semi-abstracted forms, but with identifiable architectural elements that provide a constant link to human activity.

Village With Church is one of the seminal paintings from this period and and is estimated to sell for $1.5/2.5 million.