A look at the interesting "Satellite" exhibitions around Art Stage

While Art Stage Singapore is still in full swing there were plenty of other interesting “satellite”exhibition openings this week. Among them was “Strange Dreams” by young Vietnamese artist Pham Huy Thong at Ernst & Young office.


Pham’s style has quickly evolved in recent years and gained in maturity, and he is currently on of Vietnam’s most promising artists unafraid to tackle more political themes. The current exhibition showcases two previous series, ‘Dong Bao’ which refers to the creation myth of the Vietnamese people and literally means “from the same womb” (see previous posting on this), as well as Hands, a social criticism of the power of money and rampant greed that can be found in today’s society. 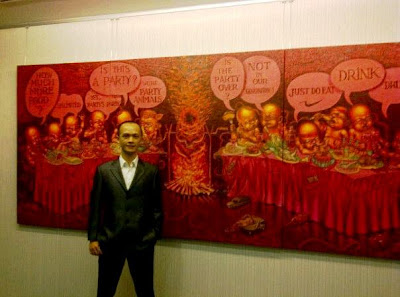 I was especially taken by Feremod of Sephec, an anagram on Freedom of Sppech, with present the Vietnamese intellectual as a turtle with a stele on its back (a memorable image in the Literary Temple in Hanoi,” with fallen letters at its foot that re-assemble form the well-known Vietnam phases “independence –Freedom – Happiness.” The image also contain anagram on blogging, a clear wipe at censure in Vietnam.
His other new works reflect on the ongoing tensions over the South China Sea island, and arm race in the region. The paintings referred to recent political event happening in Vietnam..


Another fascinating exhibition, well worth the trek to Helutrans, is Requiem for the XX Century - Self- Portraits in Motion by Morimura Yasumasa at Ikkan Art gallery. 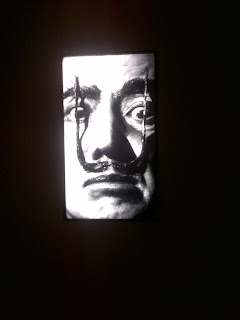 The well-known Japanese appropriation artist is transforming himself to take on the roles of Lenin, Hitler, Dali, Marilyn, Mao or Einstein in either paintings, "moving" photographs and videos. The resemblance is every time quite uncanny through the extensive use of props, costumes, make-up and some digital manipulations. It's hard to believe it is the same person every time. 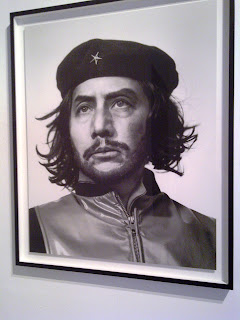 By transforming himself into recognizable subjects and deconstructing these iconic images he challenges assumptions already place on such images while commenting on Japan's complex and conflicting absorption of Western culture. 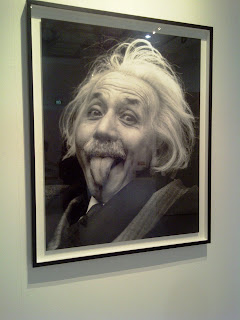 Finally, Opera Gallery at IOB has opened an exhibition of Chinese contemporary artist Zhong Biao, with plenty of beautiful large paintings exploding with dramatic symbols, movement and constant flow. Zhong has now for several years explored the them of global consumerism, social reform and the inevitable juxtaposition of the East and West 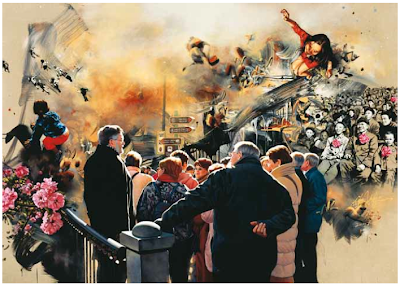 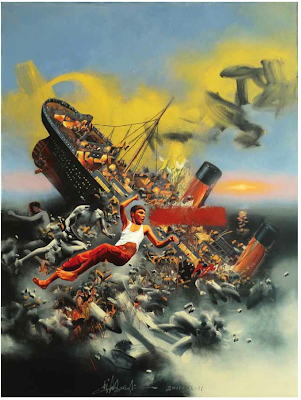 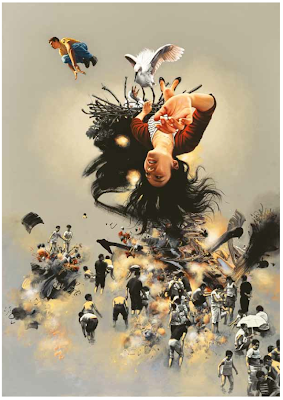 His partial painting of his canvases creates dream-like effect as the artist draws the viewer into his vision of our world.
Asian Art Chinese art Japanese Art Singapore Vietnamese Art