Christie's NY will auction the Peter H. B. Frelinghuysen, Jr. Collection of Chinese Export Porcelain on January 24. The late Peter Frelinghuysen, longtime U.S. Congressman from New Jersey and last grandchild of the famed collectors H. O. and Louisine Havemeyer, collected classic Chinese export throughout his lifetime, with an emphasis on American market, pieces with historical or political interest, and Dutch armorial, reflecting his family heritage. The collection is comprised of approximately 160 lots and is expected to realize in the region of $660,000.

His interest in Chinese export began with an inherited set of American Eagle orange Fitzhugh, circa 1800-1810, including a large platter. The so-called Fitzhugh patterns, named after the English family who ordered a blue and white service with this distinctive decoration about 1780, became particularly popular in America.

One of the sale highlights is a large Hong bowl, circa 1785, which depicts a lively Canton waterfront buzzing with the activity of Chinese and foreigners alike, and was among the most extraordinary souvenirs available to Western visitors in the period (estimate: $40,000-60,000). 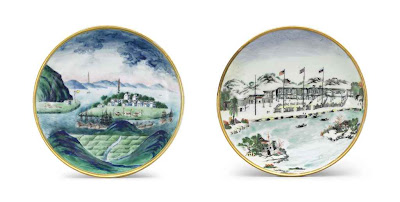 Such unique pair of dishes painted with the Hongs at Canton and Whampoa Anchorage, circa 1830, has not appeared on the market for decades (estimate: $30,000-50,000). 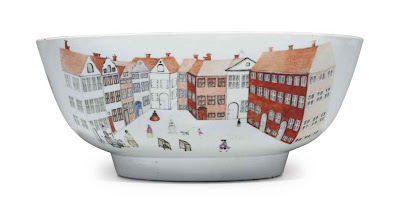 A wonderful example made for the Scandinavian market is a Copenhagen punchbowl, circa 1775, painted in bright colors on each side and illustrating Graabroedretorv (Gray Monks Square) in Copenhagen, with small figures selling their wares in the foreground (estimate: $30,000-50,000).