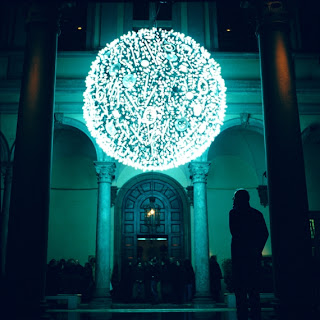 Art Stage Singapore 2012 is hoping to make a big splash for its sophomore year with several significant and large installation works on its fairgrounds. These will include the poetic "Artificial Moon" (2007) by Wang Yuyang (China), a stunning installation made from over 4,500 energy-saving bulbs, strategically designed to mimic the moon’s craters and surface features.


Other highlights will include: 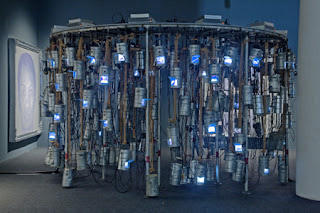 Ghost Transmemoir” (2008) by Bose Krishnamachari (India), a multi-media installation using 108 used tiffin boxes suspended from a frame and wired with headphones and miniature screens. The work captures some of the buzz and chaos of Mumbai streets, with the small screens flashing man-on-the-street interviews.

"Lost Paradise 1" (8m long) and "Lost Paradise 2" (10m long) paintings by "THEY, " an artistic team, consisting of two young Chinese artists, Lai Shengyu and Yang Xiaogang, who have been working together since 2006. The works are part of their "Cities Trilogy" series featuring Beijing, Shanghai and Hong Kong. They represent scenes of China’s last decade in the process of urbanisation showing the rapid development of the country’s economy in the background. 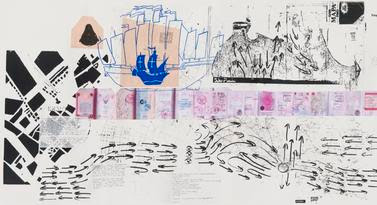 "Untitled 2008-2011 (the map of the land of feeling)" by the New York based, Thai artist Rirkrit Tiravanija . The painting is the chronicle of Tiravanija’s last 20 years, and took him over three years to complete (the painting was finished in April 2011). It features reproductions of the artist’s passport pages that span two decades from 1988 to 2008 covering places he had visited, seen and experienced. The project is a three-part scroll, 3ft (91cm) high and totaling 84ft (2,560 cm) in length, utilising a combination of techniques including screenprint, offset lithography, and inkjet print. The passports run as a central band through each of the three scrolls and underlay or overlap an assortment of images including: City maps, archeological and architectural sites, mazes, timezones, illustrations of urban flow, notebook pages and recipes.

I Still Remember by Chinese artist Yang Jiechang present Chinese traditional painting and aesthetics into a contemporary context. His calligraphy skill is seen in this large six-panel wide (300cm x 173cm each), ink-on-paper work, which narrates in painstaking detail the names of his family, friends and acquaintances.