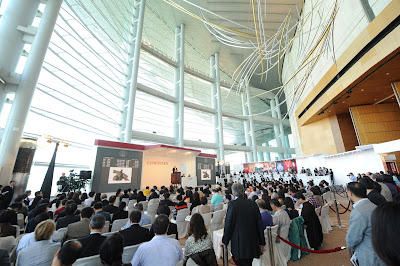 Christie's day sale of Asian 20th Century and Contemporary Art raised $39.4 million, with 76% of the lot sold but 90% by value. Zao Wou-ki was again the top lot of the sale, firmly establishing himself as the leading modern Chinese artist at auction right now, with 21.10.66 selling for $1.66 million. The second top lot was Zu Jiang's Twelve View of a Sunflower Field XII selling for $1.44 million and then Zeng Fanzhi's Mao+Calling at $1.157 million, Contemporary works that were fresh to the market and well-estimated did particularly well


For the first time, Christie's had incorporate Southeast Asian modern and contemporary artists as part of their Asia sale.

The old "valeur sure" like S Sudjojono, Hendra Gunawan and Affandi performed extremely well (although one Affandi crashed unsold).

Amongst Southeast Asian contemporary artists, Rudi Mantofani was the breakaway hit, scoring the top lot for southeast Asia with The Corner of the Earth #3 selling for $219,000. I Nyoman Masriadi's Fresh Money sold within its estimate for $188,000 and Ronald Ventura's Spellbound sold above estimate at $76,000.