Published - My Art Will Go On (Titanic exhibition at MBS) 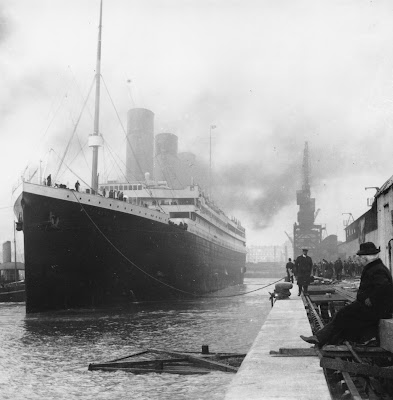 Public fascination with the Titanic began long before her ill-fated maiden voyage, and it continues to this day as artifacts from her wreck give a new poignancy to the tragedy of the sinking


On a bright Wednesday morning, April 10, 1912, the RMS Titanic left Southampton on her maiden voyage across the North Atlantic to New York. At the helm was Captain Edward J. Smith, who was due to retire after completing the maiden voyage, and on board were 2,228 passengers and crew, ranging from immigrants in third-class full of hopes for a brighter future in the “land of opportunities” to millionaires in the first-class cabins, such as Mr. and Mrs. Isidor Straus, owners of New York’s Macy’s Department Stores, and honeymooners Mr. and Mrs. John Jacob Astor IV, the developer of the luxurious Astoria Hotel (now known as Waldorf-Astoria). Four days later, the massive luxury liner struck an iceberg and sank. Only 705 people survived. 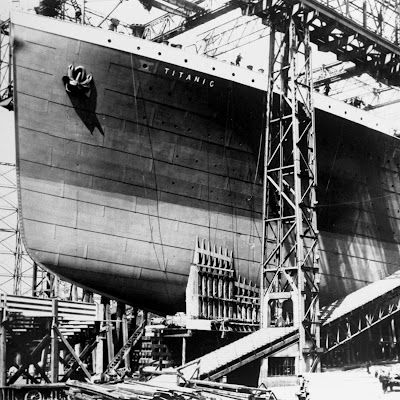 Designed and constructed at the Harland & Wolff shipyard in Belfast, Northern Ireland, the RMS Titanic was seen as a technological triumph of the Edwardian era: 269m long and 28m wide, the elegant steamship with the signature four buff-coloured funnels topped with imposing black bands was powered along by 159 coal-burning furnaces that gave her a theoretical top speed of 23 knots. Its hull was protected with a double-bottom and sixteen watertight compartments formed by fifteen bulkheads running across, while doors in the bulkheads could be closed instantly by an electric switch on the bridge, which is one of the features that prompted the White Star Line and the ships builders to deem the vessel "practically unsinkable." 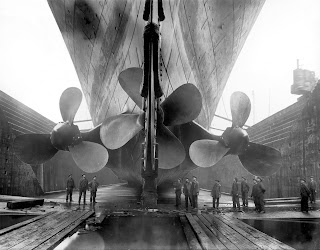 Above all, Titanic was also a floating symbol of status and luxury. Passengers in First Class enjoyed luxurious suites with a private promenade, access to several rooms dedicated to the needs and comforts of gentlemen travellers, such as a barbershop, an elegant smoking room with mahogany panels, a large open fireplace and brilliant gold fixtures hanging from the ceiling over furniture arranged for card playing and deal making. There was also a swimming bath, a fully equipped gymnasium, a squash racquet court and a Turkish bath, with special hours set aside for female travellers. 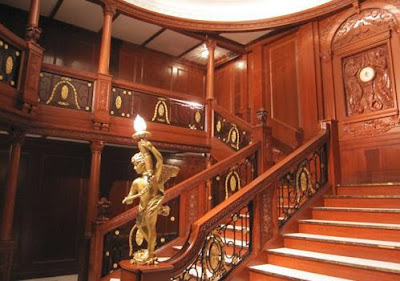 The great size of the Titanic allowed for two grand staircases in the first-class accommodation. The forward main staircase was capped with an incandescent dome of iron and glass that let the light stream through to the carved oak handrail of the banister decorated with iron and bronze scrollwork in the form of flowers and foliage. The landings were lit by gold-plated fixtures strung with crystal beads.

Ivy covered walls, elegant arch windows and white wicker furniture greeted first-class passengers in the sun-lit Verandah Café, while their more formal Dinning Saloon, the largest room on board, was furnished in the Jacobean style and could accommodate 554 diners feasting on an eleven-course menu served on fine china, silverplate and glassware.

All the furniture and fittings of the first-class staterooms had been made “more than equal to that provided in the finest hotels on shore,” according to The Shipbuilder magazine of the time, with satin counterpane in the bedroom’s wall, marble sink in the en-suite bath, and even a silver-plated pendulum lamp designed to remain level in the roughest of seas.

Passengers in the Titanic’s second-class section occupied accommodation that would rival those of first-class on other shipping lines. Their bathrooms in particular had a mahogany cabinet, or “compactum” containing a sink that could be filled with water from a hidden reservoir. The used water was tipped from the sink into a container below to be emptied later by a steward. Second-Class passengers had access to a library with silk-draped windows, a covered promenade, a gentlemen’s Smoking Room and a Dining Saloon that extended the full width of the ship. Emigrants in third class were promised by the White Star’s publicity material that “the interval between the old life and the new” would be spent “under the happiest possible conditions.” They had access to their own promenade area, a smoking room as well as a white enameled general room.

“Titanic: The Artifact Exhibition,” which just opened at the ArtScience Museum at the Marina Bay Sands, takes visitors back in time, from the construction and launch of the boat, to a window on the opulence of life on board with exacting room re-creations of some of the ship’s interiors, such as a first- and a third-class room, the famous grand staircase and the Verandah Café.

The exhibition has been designed with a focus on the compelling human stories as told through authentic artifacts that have been recovered from the shipwreck site 2.5 miles below the surface of the North Atlantic Ocean, offering poignant connections to lives abruptly ended or forever altered.