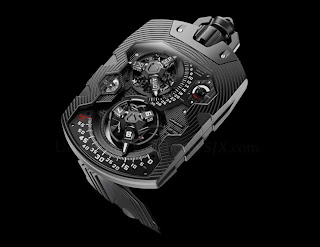 At the turn of the 20th century, pocket watches were de rigueur and served as status symbols, but starting in the 1920s they gave way to more practical wristwatches. Production of pocket watches has never completely stopped, and many brands have continued to come up with vintage-looking limited editions, often in a bid to remind customers of the device’s heritage.

Last year, Breitling unveiled a one-of-a-kind Grande Complication pocket watch based on a 19th-century design to honor Walter Owen “W.O.” Bentley, the Briton who founded Bentley Motors. Parmigiani Fleurier presented its Fibonacci, equipped with minute-repetition, an everlasting calendar and a mechanism to track the phases of the moon. Its case is decorated with enameling of a lotus flower, designed to express the golden ratio, which is closely associated with the work of the medieval Italian mathematician Fibonacci. Blancpain also launched a pocket version of its classic Villeret watch.

Some watchmakers have tried to blur the line between pocket watches and wristwatches by designing two-in-one watches that give more versatility of use. After seven years of research, Bovet unveiled the Amadeo concept last year, a patented system that allows the Bovet timepiece to be quickly and easily transformed from wristwatch into a miniature table clock or a pocket watch.

Chopard celebrated its 150th anniversary in 2010 with L.U.C Louis-Ulysse — The Tribute, a pocket watch that can also be worn as a wristwatch. It uses a claw system first patented in 1912 by Karl Scheufele I, grandfather of the current co-president of Chopard, Karl-Friedrich Scheufele. There is a limited edition of 150 Tribute watches, retailing at 63,300 Singapore dollars each, or $49,800.
But if all these new pocket watches are rather nostalgic reinterpretations of the past, some brands are pushing watchmaking’s creative and technological boundaries and reformulating the pocket watch for the 21st century. 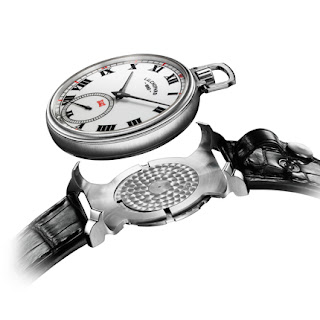 Richard Mille led the way with the RM 020 Tourbillon pocket watch, launched in 2008, combining a futuristic aesthetic with the latest technological advances in materials. Its rectangular-shaped titanium case was the first pocket watch to make use of a nonmetallic base plate made of carbon nanofiber, originally used in U.S. Air Force jets. This is an isotropic composite material created from carbon nanofibers molded under high pressure and high temperature. The watch comes with a titanium watch chain with a quick attach/release mechanism. It can be used as a pendulette de bureau with its desk stand. 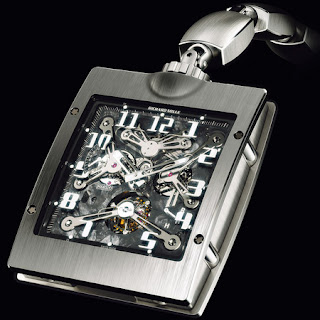 “I think the time is ripe for a return to the refinement of lifestyle that the pocket watch embodies,” Richard Mille said. “A personal pleasure that you know you have in your pocket, which requires an elegant gesture to use and show to others. I don’t think that it is a question of hiding something. It is a question of making time part of a gesture, a physical movement, rather than a quick glance downwards with the eyes to one’s wrist.”

This year, it’s the turn of Urwerk, a young company better known for its futuristic-looking watches, to unveil the UR-1001 Zeit Device Über Complication, a limited edition of eight pieces.
Urwerk has fitted 10 movements into the UR-1001, including a double satellite display — one indicating hours and one indicating the month — and as each satellite revolves, the individually numbered cubes rotate to indicate the time and date.

Other movements include retrograde minutes, a day/night indicator, running seconds, a power-reserve indicator, a revolving satellite calendar displaying months plus date, an oil-change indicator and a running-time indicator, which measures how long the UR-1001 has been operating. Urwerk claims it has been designed to run up to 1,000 years.

Felix Baumgartner, co-founder of Urwerk, says the UR-1001 was not actually intended to be worn on a daily basis, though he has been wearing a prototype pocket watch, “very much like a mobile phone.”
“This is really not about producing a commercial piece to sell to collectors,” he said. “It’s a piece that shows what Urwerk is able to do today.”

Mr. Baumgartner said the watch represented a concentration of all the movements the company had developed “in the last 10 years, with a totally new thing never done before: the calendar.”


“For us, each new watch is an evolution from one another and this Zeit Device is like a milestone — it brings it all a little bit together,” he said. “I guess you could say it’s the mother ship of our fleet. It’s really more a conceptual approach than a commercial reflection on how to wear it. Is it a pocket watch? We like to open questions in watchmaking, we don’t want to go too much into existing categories. For me it’s a pocket watch and a table clock. It’s both; that’s why we call it a Zeit Device.” Zeit is the German word for time.

Although most contemporary pocket watches are not as futuristic-looking as Richard Mille’s and Urwerk’s, many do try to bring a modern touch to the original concept. Piaget has introduced a pocket watch version of its square-cased Altiplano, which can be used with a platinum watch chain or a leather cord. Hermès has the Arceau Pocket Moon Phase, which pairs a more modern-looking dial with a calfskin fob.

Mr. Scheufele of Chopard said that while he did not believe pocket watches were about to become a new fashion statement, he detected demand for more sophisticated evening-wear pocket watches. “After all, it’s not so different than carrying your phone,” he said.

Mr. Scheufele explained that when he decided to launch L.U.C Louis-Ulysse — The Tribute, he heard a lot of naysayers arguing that a pocket watch would not really sell, even in a limited edition.
“We did not expect honestly to find 150 pocket-watch aficionados so easily, and that is why our pocket watch is actually a watch that can either work in your pocket or on the wrist,” he said, adding that the watch sold well around the world, except for in the Middle East, probably because the dress code there is less conducive to pocket-watch wearing.

But Mr. Scheufele said in a recent interview that he was now considering doing another pure pocket watch for evening wear.

“I’m still tempted to relaunch another pocket watch,” he said, “but a more elegant one, a dressier one, because I think being in a formal evening situation, there is nothing more elegant than wearing a pocket watch. I think it’s the ultimate chic statement.”

This story was published in the