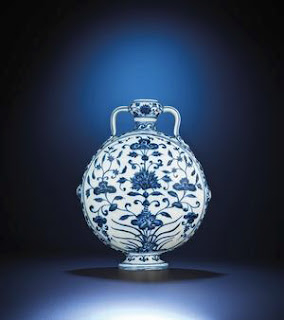 Christie’s Hong Kong will auction Important Chinese Ceramics and Works of Art on Nov 30. The sale, estimated in excess of $80 million, brings together over 400 works of high quality, wth special collection 15 exceptional jade, ivory and rhinoceros horn carvings from an renowned European connoisseur put together.

Among the leading lots in the season is an important early Ming blue and white bianhu moonflask from the Yongle period (1403-1424) that showcases an elegant blending of Chinese and Central Asia style (photo above) with an estimate of $3.7-$4.5 million. While its sophisticated decoration was the invention of Chinese potters, the distinctive shape of this early 15th century blue and white porcelain moonflask with its flaring foot was ultimately directly influenced by Islamic glass or metalwork

There is also a rare underglazed copper-red "mallet" vase with the Kangxi six-character mark which is particular note . The elegant form of this vase, with its long, slender, slightly waisted neck rising from pronounced shoulders is one that is particularly associated with the Kangxi reign. In Chinese the name often given to this form is yaoling zun or "hand bell vase", a reference to the bronze bells used in formal secular and religious music. A new addition to the Qing dynasty porcelain repertoire during Kangxi reign, this shape was rarely seen thereafter. 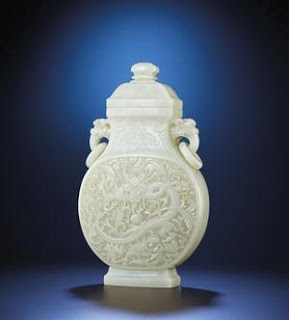 There is also this magnificent white jade dragon vase and cover from the Qianlong period (1736-1795). Formerly in the famed collection of Sir John Buchanan-Jardine (1900-1969), a Baronet with a distinguished military career who later became the head of Jardine-Matheson, this exquisite work was among a number of jades included in the seminal 1935 Royal Academy exhibition of Chinese Art at London‟s Burlington House. The Royal Academy exhibition was the first, and remains one of the most important exhibitions of Chinese art ever held in Europe. 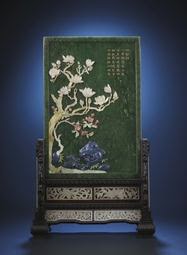 This imperial inscribed spinach-green jade table screen from the Qianlong period (1736-1795) formerly part of the famed Bulgari collection, is inscribed with an extract of an imperial poem by Emperor Qianlong . Displaying an interesting contrast of color and technique, this work was executed in the Imperial workshops in Beijing and is one of only a few known examples of spinach–green jade screens carved with imperials inscriptions.
Auctions Chinese art Christie's