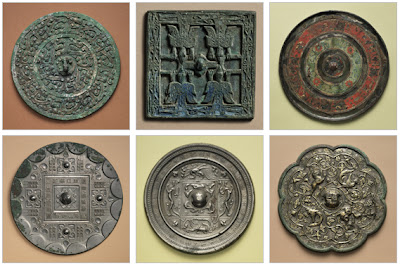 “Ancient Chinese Bronze Mirrors from the Lloyd Cotsen Collection” is now showing in an exhibition at The Huntington, in San Marino, California. The collection will be donated to the Shanghai Museum next May. 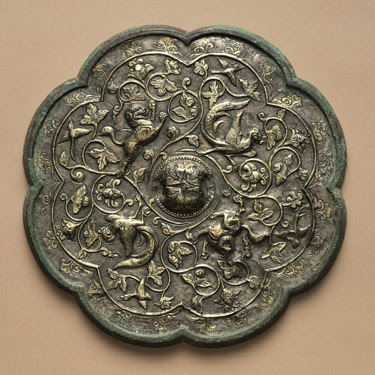 The Lloyd Cotsen Collection was established by Lloyd Cotsen, a Los Angeles businessman, philanthropist, art collector. He purchased his first Chinese bronze mirrors in Hong Kong in the early 1950s while serving in the Navy during the Korean War. Today his collection contains thousands of pieces, including substantial assemblages of textiles, basketry and folk art.

Few things provide a clearer picture of an ancient civilization than the study of its material culture: the objects that individuals created, used, and valued. “From the earliest periods of China’s history, bronze mirrors have played a significant role in reflecting, both literally and symbolically, the face of the Chinese people,” says June Li, curator of the Chinese garden at The Huntington and organizer of the exhibition. In the exquisitely wrought designs and inscriptions that decorate the backs of these mirrors, centuries of craftsmanship, aesthetic taste, dynastic change, philosophy, and consumer culture are revealed. This is one of the most significant private collections of ancient Chinese mirrors that we know of,” said Li. 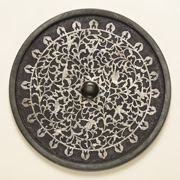 As early as 2000 B.C., bronze technology was highly developed in China, and objects made from this alloy of copper, tin, and lead were considered luxury items, reserved for the aristocratic class. Among these coveted pieces were small bronze mirrors, some compact and portable enough to be held in one hand, and others large and heavy enough to require stands. Usually cast from clay molds, they were highly polished on one side, offering a reflective surface, while the other side was decorated with intricate patterns and designs that reveal an astonishing level of skill and artistry in their craftsmanship. Birds, dragons, and serpents were common motifs in the earliest mirrors. Later, more sophisticated and elaborate designs included mythological figures, deities, animals of the Chinese zodiac, abstract patterns, background textures, inscriptions, enamelwork, and inlays of jade, turquoise, and mother-of-pearl.

That these mirrors were prized by their owners is evident not only in light of their fine craftsmanship but also because of related artifacts that point to how they were valued. In the exhibition at The Huntington a pottery tomb figure dating to about the first century B.C. depicts a woman gazing into a mirror while applying powder to her face. An elaborate cosmetic set includes a bronze mirror from around the first century A.D., accompanied by a silk brocade pouch, a wool powder puff, and a lacquered wooden box. Artifacts such as these, along with the mirrors themselves, provide a fascinating glimpse into the private lives of their users. 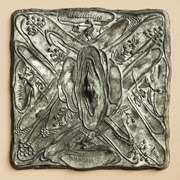 The mirrors also reflect the broad sweep of Chinese history—the rise and fall of dynasties, periods of war and peace, changing beliefs and values, and the influence of expanding commerce. As the Silk Road opened up trade routes to and from India, Persia, and Egypt, for example, new aesthetic elements borrowed from the West began to appear in Chinese design. Twisting grapevines, floral motifs, and complex silver fretwork overlaid on bronze added exotic allure to these symbols of wealth and status.
Chinese art