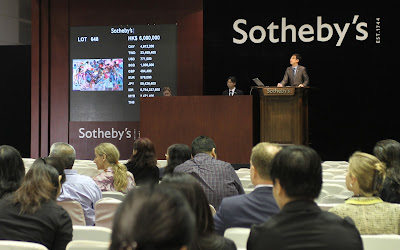 Sotheby’s Hong Kong Autumn 2011 Sale of Modern and Contemporary Southeast Asian Paintings fetched a promising $10.6 million, more than doubling the presale estimate ($4.2 million), with 81% of the lots sold and 95% sold by value.

There were enthusiastic bid both for canvases by S. Sudjojono and the largest known work by Hendra Gunawan (above) to ever come to auction, which achieved $925,641.

The two following top lots were by S. Sudjojono, proving that modern masters were outperforming contemporary artists this time around.

In the late 70s, S. Sudjojono (1914–1986) became fascinated with using wayang (shadow puppet) tales to convey social and political commentaries. In Petruk Dadi Ratu, a Javanese wayang story, the jester Petruk – seen as the embodiment of the common people – becomes drunk with wealth and power as he briefly ascends to the throne. Sudjojono created the present work - Petruk Dadi Ratu (Petruk Becomes King in 1979, as a political allegory to criticise the New Order government in his witty and piercing manner. This painting expresses a surge of new artistic creativity in Sudjojono’s late oeuvre and foretells a significant moment in Indonesia’s history that was to occur about two decades after the completion of this painting. It sold for $494,872.
A new world record, $402,654, was established for this painting by Swiss artist, Theo Meier (1908–1982). Meier had sought for the same zest and energy that made Gauguin’s Tahitian paintings so captivating, and his thirst for exotic beauty brought him to Southeast Asia, where he lived in Bali and Thailand from the 1930s. Executed in 1977, the present work exemplifies Meier’s most favoured subject and his strength: graceful lines that embrace femininity, lush warm colours of the tropics, with his signature orange tones anchored by indigo outlines. It was the largest painting by the artist to come to auction in about a decade.


In the contemporary art section, I Nyoman Masriadi and Ronald Ventura continue to produce many of the top lots, securing their place in the heart of collectors.


This painting assembles the witty visual elements that are iconic of I Nyoman Masriadi’s works. The composition is simple: a zoomed-in image of a couple sitting side by side looking at each other, both faces revealing signs of tension. Ahead of them is a beautiful sandy beach and the azure blue sea – though no one is enjoying the vista. The visual narrative and Masriadi’s scribbles seem to suggest an unspoken plot about the complexities of relationships.

Combining an apocalyptic scenery with remnants of cartoonised innocence where humanity seem to slowly dissolve into a digitized and commodified world, Ventura’s canvas shines with technique, detailing and the limitless imagination. Spurts of rainbow-like CMYK colours appear like gems against an otherwise monochromatic background. Battle Field is dark with apprehension and fear, but with a closer look the viewer will see a sliver of light that pierces through the fumes and the gas mask, revealing the glimmer of hope in the figure’s eye. 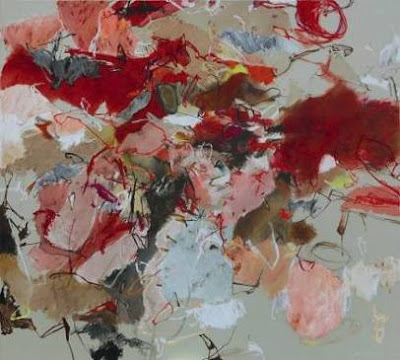 Ay Tjoe Christine’s Layers For The Circles sold for $233,333