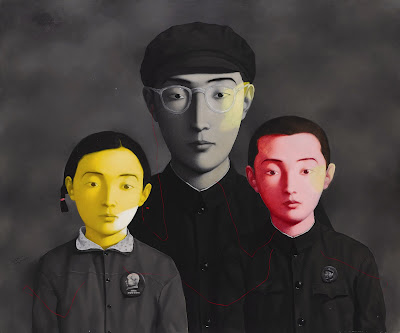 Sotheby’s Hong Kong Contemporary Asia Art sale raised $29.3 million, compared with a pre-sale estimate of $25 million, with only 72.7 percent of the lot sold (87.7% by value). This is slightly disappointing given the recent demand of Chinese contemporary art and as the photo of the saleroom shows, many seats were left empty.

Interestingly 5 of the top 10 lots were bought by European private buyers proving that Western buyers still have gunning powder (maybe "parking" their money in what are perceived "safer" values.)
Zhang Xiaogang’s Bloodline: Big Family No.1 sold for $8.4 Million, a touch above its $7.4 – 8.3 Million estimate, a new record for the artist bloodline series. It sold to a European.


Other top prices were paid for a classic example of Zeng Fanzhi ( Mask Series 1998 No. 5) and for an early gem of contemporary Chinese art Fang Lijun’s Series 2, No. 11, dating from 1991-92. Four works in the auction sold for more than HK$10 million ($1.28 million)
ut lesser works by blue-chip artists Yue Minjun and Zeng Fanzhi failed to sell.