Published - For Contemporary Lighting, Echoes of a Lion Dance 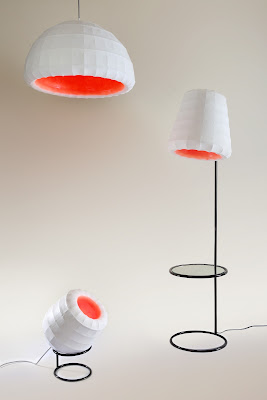 How designers are using a traditional craft to give it a contemporary relevance.


Early this year, the Singaporean designer Hunn Wai was looking for inspiration for his studio’s contribution to Milan Design Week when he chanced upon a local newspaper article about Henry Ng, the last Singaporean craftsman to make the heads worn for the traditional Chinese lion dance.

The lion dance originated in China more than 1,000 years ago and is still performed there and among the Chinese diaspora, by dance troupes from martial art schools or Chinese guilds. Performed during Chinese New Year and on other special occasions — religious festivals, store openings, birthday celebrations — it is said to bring good luck and fortune. The tradition was brought to Singapore by immigrants from South China more than a century ago.

Crucial to the dance is the lion’s head, which is made of rice paper and bamboo. It is maneuvered by one of the performers, while a second crouches under the synthetic fiber costume forming the lion’s body. It must be light, yet sturdy and strong, so that the performer can thrust it dramatically in the air.

Seeing the newspaper profile of Mr. Ng gave Mr. Wai and his creative partner, Francesca Lanzavecchia, an idea: Why not use the skills of this last torch-bearer of the tradition to design something contemporary for the home? 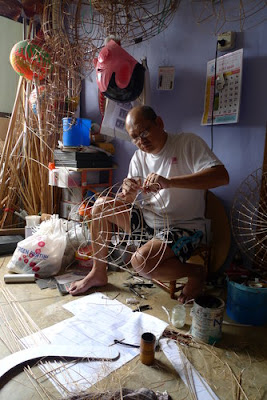 “I first met Mr. Ng to learn a bit about the craft, what could be done and what couldn’t be done,” Mr. Wai said. “I immediately realized that there were some functional responsibilities and that we could not build a stool or a chair because it would break. So we thought about lamps.”

Mr. Ng was immediately interested, though he said he knew it would be challenging to make the lamps both attractive and structurally sound.

Mr. Wai and Ms. Lanzavecchia did not want to make a lion’s head with a bulb inside, thinking it would look too kitschy, Mr. Wai explained, “so we really looked at how to abstract it to marry both worlds of domestic environment as well as craft.”

Conscious that lion head-making shared the “same genealogy” as lantern making, which also uses bamboo and rice paper, the designers decided to use two layers of rice paper, folding under the bamboo on the bottom, so that the contemporary lamps would not replicate a traditional lantern but would be a completely fresh take. 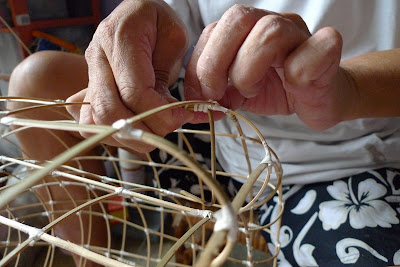 In April, their studio, Lanzavecchia + Wai, presented LEONE-Series 01 at the SaloneSatellite in Milan. The series features a family of five lighting objects handcrafted with lithe strips of bamboo, covered by white rice paper and treated with white lacquer. The lampshades are airbrushed inside with blazing orange paint, a reference to the vibrantly-colored lion heads. “We used the same paint used on model toys,” Mr. Wai said. “We figured that as the light would bounce back the orange paint, it could give it a fiery glow.”

The lamps retail for 2,000 Singapore dollars, or $1,500, and up, depending on the size, but at this stage they are only available through the Web site of the studio and are made to order.

The studio wants to “keep the story of the craft intact” before manufacturing the lamps on a larger scale, Mr. Wai said. “At this moment it is to prove to ourselves if this concept is feasible and, as well, gauge the response of consumers.”

In the mid-1990s, there were about 10 master craftsmen in Singapore who built heads for lion dance costumes. Today, Henry Ng believes he is the last in what has become a dying trade in Singapore, as cheaper alternatives can be made in China.

Mr. Ng, 53, took up building lion heads as a hobby, teaching himself by dismantling damaged ones and repairing them. He estimates that, over the years, he built about 2,000 lions — many used in national and international competitions. One head takes him up to five days to make and costs about 1,250 dollars including the lion’s costumes, compared with 400 to 500 dollars for one made in Guangzhou, China.

Read the whole story in the