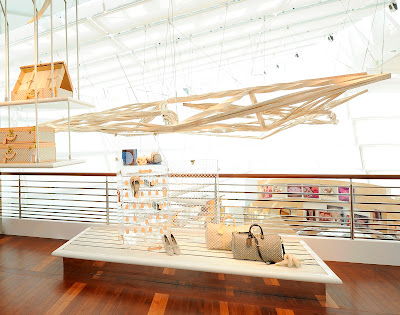 The Louis Vuitton Island Maison at the MBS in Singapore is much more than a new store to indulge in the brand's latest offering. This little design jewel also houses a stunning new sculpture by Turner Prize winner Richard Deacon made of twisted wood, along with a site-specific pop art wall by Cuban-born illustrator Ruben Toledo, who gives his colorful take on Singapore's better known icons, as well as a small, but well curated art exhibition on the theme of "islands." 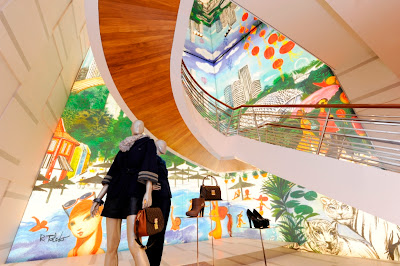 The sculpture by Deacon is suspended from the glass ceiling of island, gently floating above the women retail space. Entitled "Upper Strut" is made out of twisted oak, which the sculptor had to steam and bend very quickly (within 5m) to achieve the still rather organic shape - This use of steam is a nice fitting for a brand who made its name with steamer bags.! Deacon told me he was inspired by the water that surround the LV island, as the undulated wood recalls ripples on the surface of water. 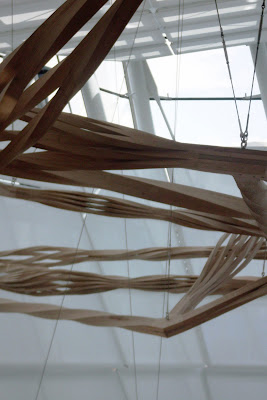 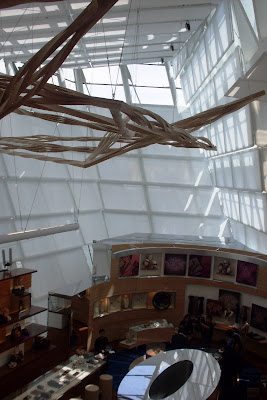 The beauty of the piece is that it invites the viewer to travel through and around it (befitting again for a brand which epitomized luxury travel) . As you can see from those picture, the piece looks different from different angles, sometime almost flat in a lizard shape, sometime looking like three giant kites floating in the air. 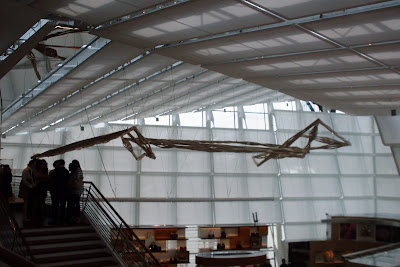 Visitors can access the LV Island in three different ways: via an outdoor bridge, by boat, disembarking at a jetty, and from the mall via a tunnel and ascending 'travelator' which leads to the centre of hte pavillion. On the right of the tunnel, one can find a selection of historic LV lugage linked to the nautical world and transtlantic travels of the early 20th century, On the left side, is a small cultural space which will fit rotating exhibitions and which opens with "Islands." 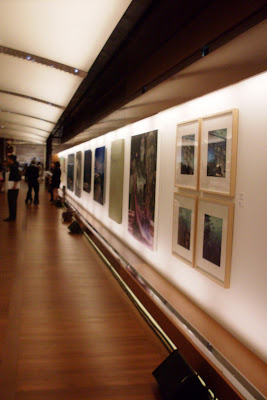 It features artworks by 15 artists, whose chosen works explore the relationship with the sea and the notion of solitude, utopia, sanctuary, borders, journey.
I was especially taken by the beauty of this phorograph by Chow Yun Fat (The actor turned photographer), who made this work especially for the exhibition. Chow has visualised his photograph of a large rock that has fallen from a cliff to land on a wave-cut platform as an island, complete unto itself, and alone. The waves that surge around it are receding, and a long exposure has softened the foam and turned the spray into squiggles, transforming the landscape from something fixed into an ephemeral moment. The position of the photographer high above the rock would ordinarily rob the scene of scale, if it was not for the long raking shadow which serves to give the work a third dimension and identify this as a unique moment in time.


Malaysian artist Eric Chan’s painting “Say that you love me” was also made specifically for the “Islands” exhibition and combines three photographic negative images of the statue of Sir Stamford Raffles, the “father” of Singapore, and an ultra-highspeed stop-action photograph of a splash of paint. Together these symbols may represent the idea of how Raffles came to Singapore by sea but they also speak to the relationship between history and colonialism and art and reality. Chan presents three views of Raffles, including one in which he gazes imperiously down at the viewer, and one which seems to show him emerging from the splash like Venus from the waves in order to suggest that we are seeing a full picture of both the man and his myth.