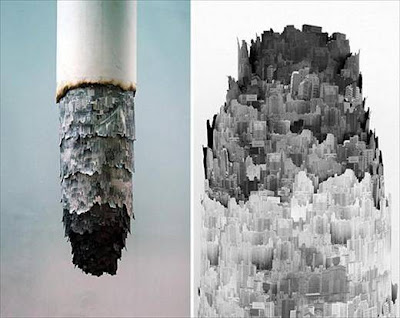 The multimedia artist is most known for his creation of mysterious city-scape scenes that look like tradition “Mountain and River” (Shan Shui) paintings of the Song Dynasty, but on closer inspection the mountains are in fact made up of a myriad of metropolitan buildings, a collage of black and white photographs..

The Shanghai-based artist, who was trained in Chinese traditional painting and calligraphy, began experimenting with modern art, mixing modern Chinese ink paintings, photography and videos in 2006.

Schoeni will present his newest series entitled The Peach Blossom Colony, together with a selection of his most impressive works to date, including the Heavenly City Series (2008), On the Quiet Water (2008), Snow City Quaternary Series (2009), and Viridescence Series (2009), all of which encompass Yang’s typical theme of the clashing and fusing between the modern city and the ancient Chinese landscape.
Another major highlight of this exhibition will be Yang’s recreation of his stunning Cigarette Ash Landscape installation that he presented four years ago at the Danwon Arts Festival-Contemporary Art Festival Art Now 2007 in Ansan, Korea. Here his striking landscape is intricately created out of black and white photographs of cityscapes, collaged and piled to mimic cigarette ash.