At the 2010 Shanghai World Expo, the biggest attraction in the China Pavilion was a giant digitally animated reproduction of Qing Ming Shang He Tu, a well-loved and revered painting from the Song Dynasty. A Moving Masterpiece: The Song Dynasty As Living Art will be making its debut outside Greater China and show at Singapore EXPO Convention and Exhibition Centre from Dec 7, 2011 to Feb 6, 2012

Qing Ming Shang He Tu or Along the River During Qing-Ming Festival is a historical, panoramic painting of ink-on-silk by the Chinese artist Zeduan Zhang from the Northern Song Dynasty. The piece is painted on a hand scroll and portrays three scenes of daily life during the Song Dynasty: suburban, wharf, and urban areas. The painting contains more than 600 representations of people, dozens of houses, and a view of the picturesque trees and nature of the setting. The content reveals the lifestyle of all stratums of society as well as the different economic activities in the rural areas and the city.

Some Chinese scholars have compared it to the Mona Lisa of China.

Thanks to state of the art technology, the panoramic 120m by 6m work can now come alive with the use of the modern digital technology as we get to see characters walking and talking across the tableau as visitors follow their moves.


UPDATE - Having seen the "masterpiece" it is well worth trekking to EXPO and braving the crowds.
This is truely a fascinating way of learning about Song Dynasty society . There are excellent explanations provided via headphones about numerous action details on the scroll. You will need a good hour to listen to all the information. Go quickly through the entrance exhibition that presents in 3-D all sorts of replica objects related to the Song Dynasty to concentrate on the animated scroll, which can captivate children's attention as much as that of adults. Only wishing all history lessons were presented this way to children! 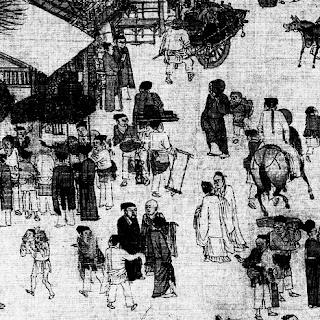