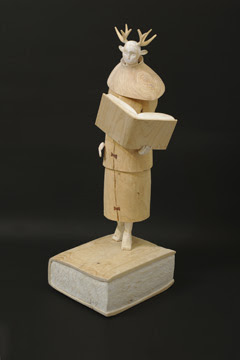 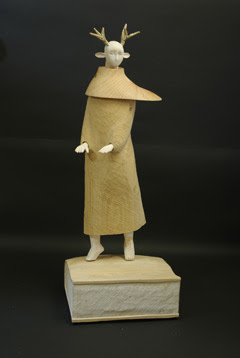 Born in 1961, Oohira Hiroshi is a well known graphic designer who has received many prizes in Japan and abroad. He took up the practice of wood carving ten years ago and has been holding yearly exhibitions in Osaka and Tokyo since 2000.
His delicate sculptures are all created from cypress wood. The colouring and marks derived from the sculpturing process have also been purposefully allowed to remain, acting as metaphors to slight imperfections (whether literal or figurative) which viewers can relate to.

There is a meditative quality to these earthly creatures. Each possesses a distinctive horn headgear, a symbol of the primitive and animalistic. Yet, some hold books in hand, symbol of knowledge yet to be acquired. A contradiction to engage the viewer to refrain from observing the world through the fogged lens of social stereotypes.