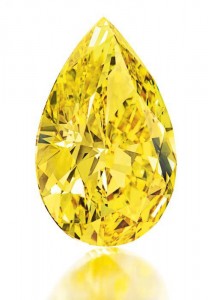 Christie’s New York will auction The Vivid Yellow, a rare, highly saturated fancy vivid yellow diamond of 32.77 carats, as the star lot of its October 18 sale of Magnificent Jewels. The golden yellow hue of this large pear-shaped stone is so intense and so deep that the Gemological Institute of America (GIA) ranks it amongst the rarest of gemstones in its class. The stone is expected to achieve in excess of US$6 million.


Yellow diamonds gain their color from nitrogen replacing carbon atoms in the diamond’s structure. Where there is less nitrogen present, the resulting stone may be light or "faint" in color. In the case of

The uncommon nature of this particular diamond’s color intensity has been reconfirmed by the GIA, whose gem laboratory is devoted to the grading and identifying of important diamonds. In its grading report for the stone, the GIA classifies

The Vivid Yellow as "Fancy Vivid" – the highest saturation one can find in a colored diamond. Only about one in 10 million diamonds possesses a color pure enough to qualify as fancy vivid.

The unmounted diamond, which is about the size and shape of a guitar pick, will be the star lot of Christie’s first major jewelry sale of the fall 2011 auction season. The stone has the potential to surpass the per-carat price of US$203,000 achieved for The Golden Drop, a pear-shaped yellow diamond of 18.49 carats sold in June 1990 at Christie’s London.

Christie’s has arranged a global preview tour of  The Vivid Yellow diamond prior to its sale at Christie’s New York in October. The diamond will be on view on the following dates: