On September 15 and 16, Christie's New York will present Fine Chinese Ceramics and Works of Art, a sale expected to realize in the region of $19 million. Headlining the sale is a very rare large and finely cast gilt-bronze figure of Vairocana (estimate: $600,000-800,000), which is an exceptional example of its type, exhibiting superb casting and fine attention to detail.


One of the highlights of the ceramics section is a rare blue and white Ming-style moonflask, Qianlong seal mark in underglaze blue and of the period (1736-1795). This flask is particularly rare as other examples of this design are usually of larger size. 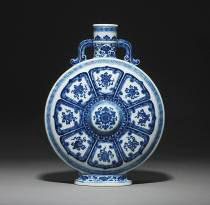 Highlighting the selection of twenty textiles from a private European collection is a rare pair of brocade gold-ground civil official’s rank badges of a peacock, buzi, late 17th/early 18th century. Woven in shades of blue, coral red and turquoise, rank badges of this type with a gold ground are exceptionally rare. 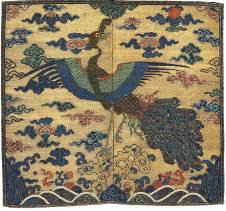 Also included in the sale is an impressive selection of furniture fashioned from some of the most highly prized woods in China, including huanghuali, literally "yellow flowering pear wood," a rare type of rosewood, and zitan, another rare type of rosewood admired for its rarity, density, fine, tight grain and deep purplish-brown patina. Among the zitan highlights is a very rare pair of huamu-inset zitan armchairs, 18th /19th century. Deeply carved with dragon and phoenix decoration, this pair falls into a group of mid-Qing Palace furniture.