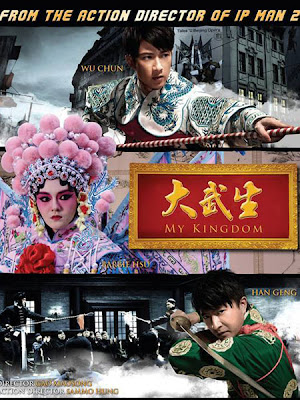 Four years in the making, with action choreography from Sammo Hung, My Kingdom is the new Chinese blockbuster that brings together the world of martial art and Chinese Opera with refreshingly new fight scenes.

The film has a lot going for it. Director Gao Xiaosong has assembled an attractive young cast with Wu Chun and Han Geng, playing two opera warriors bent on avenging their master, while Barbie Hsu (excellent) is for once given a meaty acting role that goes well beyond being a candy eye folder seen in so many of those Chinese action films.

The cinematography is superb and gives justice to the colourful operatic world the story is set in, and the historical background (the swinging Shanghai in the 1920s) and the traditions of Chinese opera are also well presented. I thoroughly enjoyed the fight scenes choreographed by the legendary Sammo Hung, that mainly use spears and swords, and the storyline has some nice twists (which I won't revealed).

Yet ultimately, the film falls a bit short as its last (over-long) 30 minutes plough through laboriously to resolve the plot twists (The final emotional scene is completly over-acted and brings laugh instead of tears). A simpler and quicker ending would have been much more satisfying.