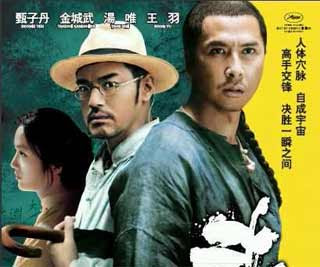 Peter Chan’s new film, ‘Wu Xia’ achieves what many wu xia-genre films haven’t managed before: it gives a soul to its characters.

Wu xia films maybe high on action, but they’re often low on character developments…  You get amazing fight scene, grand sceneries, historical costumes, but little in term of plots. Good guys fight the bad guys, good guy wins, end of story.
In many ways, Chan has ‘westernized’ the genre, while still staying true to his Chinese roots. The director relishes explaining the science of martial art, but there is also a complex story with the action supporting the story rather than driving it.
The mood is set from the start of the movie. The first action scene, a good 5-10m into the film, is almost a reluctant one, as Donnie Yen’s character, an seemingly unassuming paper maker, is drawn into a fight against a dangerous murdered that he appears to win by chance. But there is more to meet the eye as Detective Xu Bai-jiu (played by Takeshi Kaneshiro) tries to unravel CSI-style (which gives the Chinese film a fresh visual style). 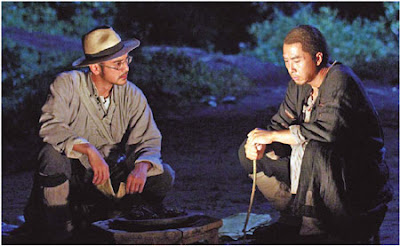 Some of the action scenes (Yen battling a knife-wielding assailant between oxen, or his final battle with only one arm left) are excellent, though aficionados of the genre will complain there aren’t enough of them. But that’s probably why the director had room to develop the characters and storyline, which is what makes the film a success.
Yen’s acting performances can often been described as wooden, but here the actor’s lack of facial expressions works perfectly as his character tries to hide his emotions and his past. The actor is also still in top physical form and the action scene he participates in and choreographs are great to watch.

My only complain: Tang Wei of Lust, Caution, who plays Yen's wife, was completly waisted as an actress and could have been given more to do.

All in all it's a film that should travel well internationally. Chinese audience have been responding extremely well, as the film came in number one on his opening weekend. The film has already grossed RMB153.4 million ($23.7 million) in China.