To commemorate the 100th year of the birth of Liu Kang, the Singapore Art Museum is hosting a major retrospective featuring 100 artworks, sketches, writings and artefacts. 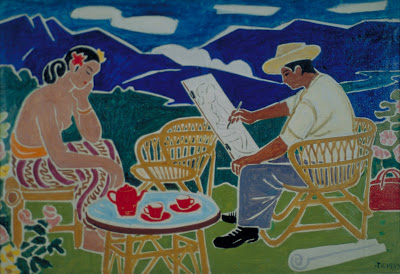 Born in China, Liu Kang (1911 to 2004) played a key role in the development of Singapore’s art scene, and is probably most famous for being part of the 1952 Bali trip, along with Cheong Soo Pieng, Chen Chong Swee and Chen Wen Hsi. The trip gave birth to the Nanyang art style - a mix of tropical subjects with Western techniques.

As a young artist he went to Paris to study in the 1920s and attended the Academie de la Grande Chaumiere in Montparnasse, a school that eschewed the strict academic rules and let students come and go as they pleased. The Academie, which was frequented by Modigliani and Giacometti amongst others, provided ateliers with models for artists to sketch and Liu Kang would regularly attend the afternoon and evening sessions having taken French language classes at the Alliance Francaise in the morning.

When not working on his craft, Liu Kang would spend his time in the city’s art museums and galleries, with Sundays often spent at Le Louvre because admission was free on that day. He was introduced to the sculptor Paul Landowski (who later sculpted the bust of Sun Yat Sen) and visited Kees van Dongen, an essential figure of the Fauvism movement in the 1920. Liu Kang’s viewing of the works of Matisse for an exhibition celebrating the French master’s 60th birthday left a powerful and lasting imprint on the young Chinese painter, and Matisse was to influence him in many ways, including his pursuit of innovation and sublimation of images.

Liu Kang was particularly attracted to post-impressionist and fauvist paintings because their direct observation of the subjects still left room for an artist’s self-expression. He extensively studied the works and writings of Matisse, crediting him for transforming sketching from a “tool in foundational training” into “an independent form of art with eternal value.”
Upon returning to China he taught in Shanghai during the 1930s before moving to Singapore at the start of the war, where he remained until his death.

Although he painted chiefly in oil, a medium in the western tradition, he followed the traditional practice of Chinese ink painting, placing an emphasis on lines and leaving areas unpainted. The artist also uses bold outlines, which are an influence of batik, as well as broad colour fields, a cross influence of Chinese ink aesthetics and Post-Impressionism.
After moving to Singapore, he shifted away from academic subjects in art which he learnt during his time in Europe to focus on capturing the scenery and daily lives of the local people.

The exhibition is spread over 3 floors, and the top one has some very interesting paintings of local life, which are not as well known. 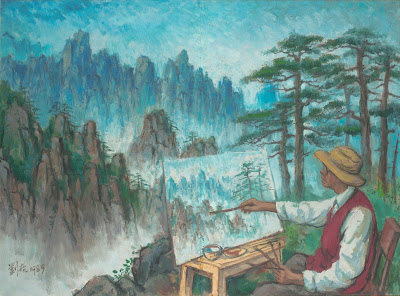 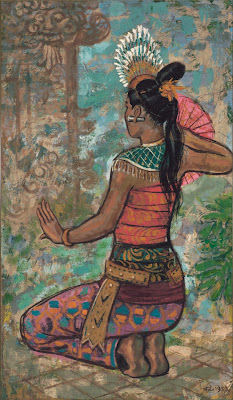 The exhibition will be on display at the Singapore Art Museum until October 16.