A whimsical artistic collaboration for an Only Watch 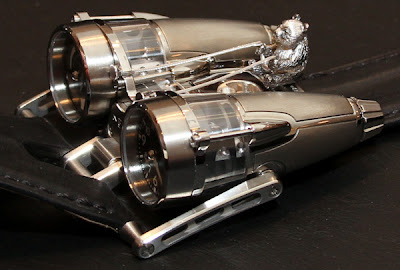 I have seen artistic collaborations between Chinese artists and watchmakers and even seen panda designs on watches (Titoni’s panda watch with Zhang Qikai), but this unique new watch by MB&F for the Only Watch project is truly special. 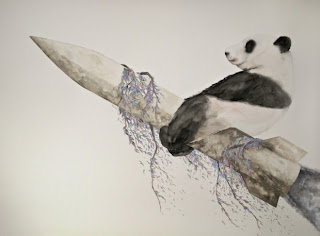 MB&F CEO Max Büsser first noticed the work of Paris-based Chinese artist Huang Hankang a few years ago when he bought his painting of a panda flying on a rocket. For the Only Watch project – an auction of unique watches held every two years in Monaco to benefit children with duchenne muscular dystrophy – MB&F and Huang collaborated to give a new twist to the HM4 Thunderbolt. Huang first imagined and painted a carefree panda bear flying free on top of HM4 and MB&F transformed his painting into a horological expression with a gold little panda “riding” the watch by holding reins made of twisted gossamer filaments made of gold. The panda was hand-carved and then cast in 18k white gold using the “lost wax” technique and the panda and his reins have been micro-engineered to be completely detachable so that HM4 transforms from a flying machine into a Horological Machine. The artist usually paints with watercolours, and often features juxtapositions of animals in unusual situations or positions. Huang’s original painting will accompany the HM4 Only Watch.