The Museum of Contemporary Art Tokyo presents "Kohei Nawa: Synthesis" - a solo exhibition presenting the work of Kohei Nawa (1975-), who develops sculpture and spatial expressions utilizing the concept of the ‘Cell’.

Nawa uses fluid materials and media, such as beads, prisms, expanded polyurethane, silicone oil, etc., as metaphors for the senses and thoughts of the information society. This exhibition is the first to present a comprehensive view of all the various categories of work Nawa has produced to date.
In the 'Beads' series, stuffed animals, etc., which were purchased on the Internet, are covered with transparent beads to create what he describes as ‘PixCell’. 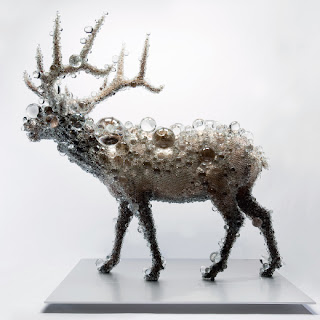 In 'Prism' the concept of a ‘Cell’ as a vessel of the image is expressed through the form of box covered in a prism sheet that splits the light, causing the object that should exist within it to appear as a virtual image according to the angle at which it is viewed.


In 'Liquid' bubbles appear and vanish on the surface of white, fluorescent, silicone oil, expressing the countless ‘cells’ that are produced to stimulate sight and touch.


In the 'Glue' series, paintings/sculptures were created on the wall using a glue gun that grows like ‘ivy’.


In 'Scum' a surface created of expanded polyurethane produces PixCell bubbles like ‘scum’, representing the blunted swelling of our senses 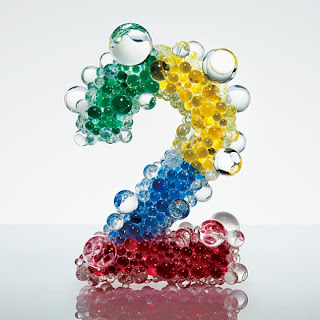 Among his other varied experiments presented here is ‘Dot-Movie’, a video-installation work in which spots of paint have been dropped, one by one, to create a dot pattern in which their mechanical alignment struggles against the analog fluctuations resulting from the manual process.