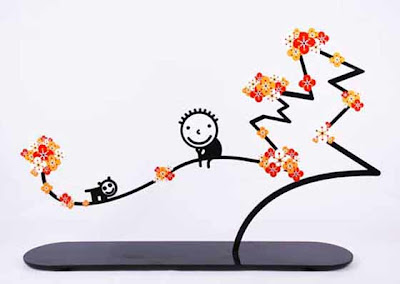 Opera Gallery Singapore is opening Thursday “K-Pop Art,” an exhibition focused on Korean artists who are primarily expressing themselves (though not exclusively) in Pop Art style.
From the wildly whimsical compositions of Kwon Ki-Soo, Lee Dong-Uk and Yim Tae Kyu, to the textured interpretations by Hong Sang-Sik and Kim Chang-Young, the exhibition presents a wide array of contemporary paintings and a few sculptures. 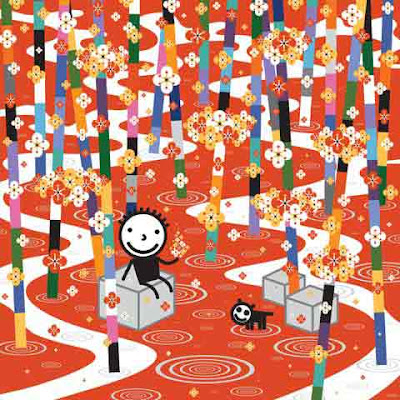 My favorite works are by Kwon Ki-soo. The artist created 'Dongguri' - a black-and-white geometric figure with a cheeky permanent grin that roams across his varied works. This comic-like character can be found in Kwon's animations, playing amongst traditional Korean landscapes or floating across a painted flat expanse of monochrome colour or rendered in multiples and in three-dimensional forms like a miniature Dongguri army. This is Kwon’s artistic alter-ego, a simple yet indistinct personality whose cute pose and carefree spirit is unwavering. The childlike Dongguri cannot be judged according to looks, age or dress; it has become a repetitive artistic icon and commercial product that blurs the difference between mass production and art. 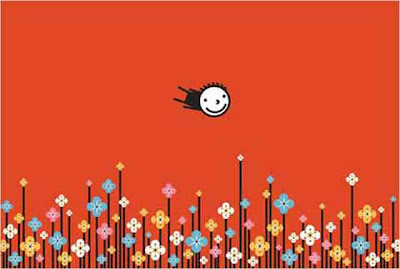 Yim Tae Kyu, wo has previously shown at ArtSeasons and SAM, has an instantly recognizeable style that blends traditional ink painting with amusing scenes of metropolitan banality. 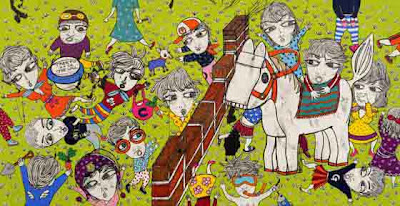 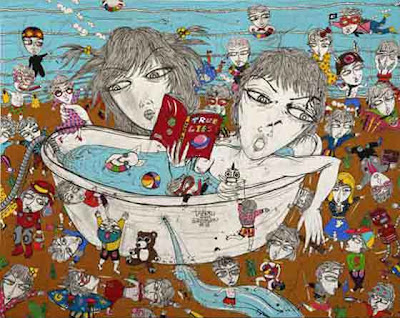 Lee Dong-Uk uses balloons to represent his internal conflic, likening them to symbols of strength and lightness all at once. As they float in his paintings, the balloons have the ability to both hold internal pressure and resist external forces all at once.