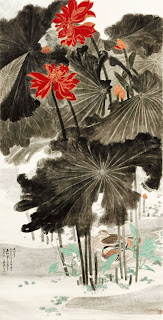 Sotheby’s Hong Kong achieved a white glove sale at the auction of The Mei Yun Tang Collection of Paintings by Zhang Daqian (also spelled Chang Dai-chien), raising $87.3 million, against a pre-sale estimate of $16.7 million. All the 25 masterpieces on offer were sold in just over an hour, and the top lot of the sale, Lotus and Mandarin Ducks sold for $24.5 million, setting the auction record for the artist.

In a saleroom filled to capacity, bidders in the room and on the telephone competed fiercely for the works offered. Bidding for Lotus and Mandarin Ducks, the top lot of the sale, was brisk and concluded after approximately 30 bids when a telephone bidder defeated a rival in the room. Bidding for Ancient Temple Amidst Clouds also opened at HK$10 million, followed within seconds by an offering on the phone of HK$60 million that took the whole room by surprise. The bidder on the phone successfully acquired the work for HK$67.86 million or US$8.7 million.
The auction was Sotheby’s Asia’s first-ever standalone art sale in nearly 40 years. The stunning result achieved proves that impeccable provenance is key to strong participation and bidding interest.