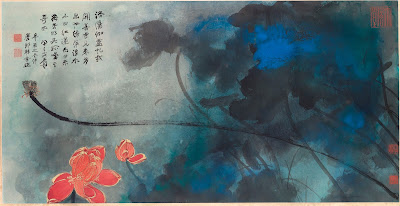 Time to reflect on the Christie’s Hong Kong Spring sale and dissect some of those data. Overall the 6-day sale brought in about $470 million .
1. 20th century art outperform contemporary art
Asian contemporary art and 20th Century Art performed fairly well. The Evening Sale of Asian 20th Century and Contemporary Art on 28 May raised $62.2 million (double of the pre-sale estimate), with 95% sold by value and 93% sold by lot. The top lot was a work by Zao Wou-Ki ‘2.11.59’ which sold for $5.26 million, as was the second top lot that sold for $4.9 million. Zeng Fanzhi’s Self-Portrait came third, selling for $4.8 million, while his Leopard came 5th selling for $4.6 million.

Zao Wou-Ki performed again extremely well the following day at the Day Sale of Chinese 20th Century Art, clinching the two top lots of the sale, which raised overall 13.9 million, with 88% sold by lot and 98% sold by value.

The day sales of Asian Contemporary Art on 29 May raised $20.5 million, and was only 77% sold by lot and 88% sold by value. The top was again Zeng Fanzhi with ‘Andy Warhol’, which sold for $1.24 million, while the second top lot was another Zeng Fanzhi’s Sky No 2. Zeng Fanzhi has somehow fallen out of favor since 2008, but this is proven to be a return in force.

2. Fine Chinese paintings remained highly prized
The sale of fine Chinese modern paintings raised $123/1 million with 97.9 percnet of the lots sold and 99.8 percent sold by value. Competitive bidding was such that 93% of the lots sold over their high estimates and 15 lots sold over HK$10,000,000. Zhang Daqian’s work dominated the auction, with 6 of this works in the top 10 lots! Lotus sold for $7.2 million

3. New artists are catching the attention of collectors.
Japanese artist Zenzaburo Kojima’s ‘Nude Reclining on Yellow Chair’ $341,810, while Chinese artist Pang Jiun’s ‘A passerby hears a fair maiden’s laughter in the garden ring’ sold for $310,970. In the Southeast Asian Category, Filipino artists new to the market performed extremely well, as José John Santos III and Patricia Eustaquio. Contemporary art from the Philippines in particular showed an impressive growth, with 95% of the lots by Filipino artists being sold.