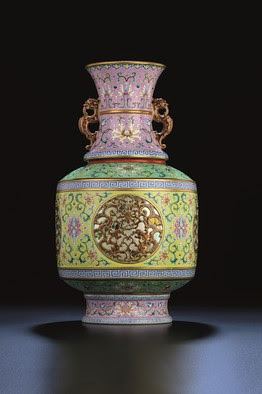 Christie’s HK auction of Chinese Ceramics Works of Art was the worst performing sale this season, raising "only" $106.7 million over four sales on June 1. In the Imperial Sale, which usually attract top bids, only 76% of the lot sold and only 63% by value. That would be because the top lot, an 18th century revolving Falangcai vase valued at $31million, failed to find a taker. This is the second time a top lot flop (a similar thing happened with a Qing Dynasty vase in April), which underlines Chinese collectors are refusing to pay over the odds now to repatriate "treasures." Another high-priced lot, a “Dragon and Clouds” screen made of rosewood and featuring fine carving and painting, also failed to sell, as bids stopped short of its reserve price.

Amongst the highlights of the day that did sell was a falangcai ‘kui dragons’ bowl for $7.7 million, and an Imperial mother-of-pearl inlaid black lacquer incense stand for $1.8 million, as well as the group of lacquers from the Kaisendo Museum. Ceramics sold particularly well today, as did jade carvings and Imperial furnishings, a category that has seen much growth in recent years. One of the many highlights was the exceptionally rare and beautiful Qingbai seated figure of Guanyin which was sought by enthusiastic collectors and sold for three and a half times the estimate, a world record for a Qingbai porcelain.