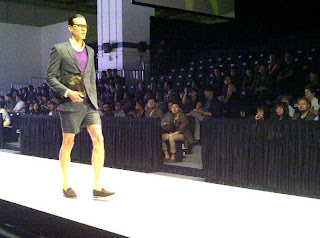 Thai designer JBB* opened the third day of the Singapore Men’s Fashion Week with his A/W 2011 collection. The young designer adapted the business suit to tropical weather. He sent models in charcoal grey tailored shorts and blazer. The outfits had a casual, comfortable feel, but also made the models looked like little school boys. Apparently, it was intended by the designer who looked for inspiration in old pre-WWII photographs of boys in jackets and shorts. Giving a modern twist on the look he paired a double breasted blazer with camouflage cargo, a Prince de Wales tweed jacket with tailored shorts with some faux pocket flap details and a colorful sweater underneath. The approach was fresh and well tailored. 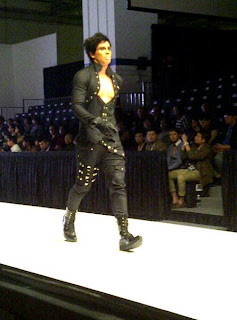 Filipino label Jail Jeans went rock and roll, sending down the runway models in black leather and diamante lips (doesn’t work for me!). The show had a dramatic start with the first model undressing and transforming a jacket into some sort of combat shorts. After that it was all glitters and hard core leather, low cut jeans, zip details a plenty, diamante patterns. Nothing easily wearable.


Filipino designer Jerome Lorico was more pragmatic in his design approach, thought many of his black knitwear were forward looking. Model wore sweaters with complicated ribbed-pattern like armors, long shawls with fringes. Some looked like a Madonna with the black shawl over their head. It was all dramatic but without the over the top styling, and many pieces could be worn with panache. The designer also tried to gave his twist on the trouser by adding flapping wings along the length of the leg. Brought to mind some weird amphibians and didn’t quite work . 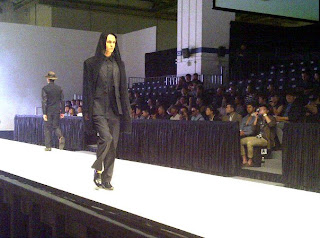