Published - From robe to blouse and sarong 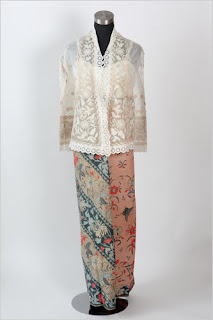 The sarong kebaya, a long-sleeved blouse worn with a tubular skirt or sarong, is the focus of an exhibition opening April 1 at the Peranakan Museum here. The 58 outfits in the show, which will include mounted textiles and other artifacts, are meant to illustrate how the garment evolved among the Peranakan, descendants of the early Chinese migrants who settled around the Straits of Malacca, and the influence that Islam and Indian, Dutch and Portuguese styles have had on the costume. “

The garment traces its original design to the ninth-century qaba, a long robe worn by Islamic royalty and later adopted by the upper and merchant classes.  The exhibit shows, for example, how European and Eurasian women in the Dutch East Indies started adding lace to their long kebayas, the blouse portion of the costume, from the late 18th century. And by the mid-19th century, the lace kebaya worn by women in Jakarta, which then was called Batavia, had shortened to the hip-length garment that it is today.

Local taste also has produced embellishment that evokes the Peranakans’s Chinese roots, like dragons and phoenixes, and the introduction of chemical dyes in the batik industry of Southeast Asia also brought new vibrancy to a costume that traditionally tended to have the muted colors of natural dyes. Read the full story in the IHT .