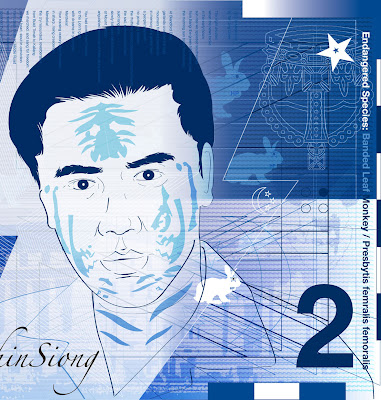 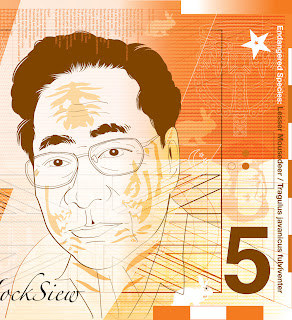 Green Zeng is a multi-disciplinary Singaporean artist whose works encompass visual arts, theatre and film. A member of the experimental company Metabolic Theatre Laboratory, performing with the group in Singapore and Japan, he's also the creative director of Singapore film production company Mirtillo Films, which he co-founded. He has directed many short films, some of which have been selected for international festivals including the Cannes Film Festival. The artist has long been inspired by the history of Singapore and how banknote designs can be used to communicate ideas about a culture and a society. For this new show, Malayan Exchange: Studies of Notes of the Future, Green Zeng continues to re-examines our understanding of history and national identity using well known pro-communist figues, Lim Chin Siong on a $2 bill and Lim Hock Siew on a $5 bill. Zeng's carefully interwovens symbols to encourage viewers to uncover clues about Singapore’s history and identity.

By presenting an "alternative" type of note exchange, the exhibition presents the possibilities of Art as a starting point for dialogues on Singaporean history and identity. The fact that the show is taking place at the Arts House, the old Singaporean parliament, is not lost.. The show opens today.