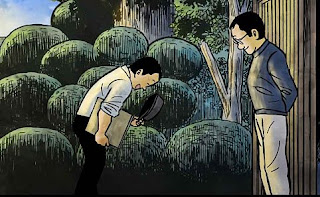 Yoshihiro Tatsumi is considered the godfather of alternative comic in Japan and is widely credited with starting the gekiga style back in the 50s - a darker, grittier cousin to the fantasy manga style that instead engaged with the social issues of the day. His life and five of his stories (which have never been put into film before) will be at the center of Eric Khoo's latest film, Tatsumi, due to be ready mid-February. I got to see a 10m sneak preview today, one of the stories, and it left me disappointed: I wanted to see more!!! immediatly!!.
Khoo is arguably one of the best Singaporean film makers (Be with Me is my favorite film of his), but it must have taken some convincing to prompt Tatsumi to agree to the film. The legendary graphic novelist is even doing some voice-over on the biography part, while a famous Japanese actor is narrating the stories. The film is extremely faithfully to his comic strips style.
The film is being sold in Europe by the same company which pushed the Thai film Uncle Boomee Who Can Recall His Past Lives (which won the Palme d’Or in Canne). First stop will be Berlin (if the film is ready), then possibly Cannes.