There were plenty of opportunities to mingle with some top Asian artists. Here is what they told me:

Yoshitomo Nara: ‘I’ve cancelled all my exhibitions this year. I don’t like to work with deadline. I like to make paintings without deadline. I live outside Tokyo in the country side with only 3 neighbours. I can listen to music, make paintings, drawings…My next show will be in Japan in 2012 at the Yokohama Museum. It will be all new works.”   His Bintan house installation at Singapore Art Museum is a must-see! 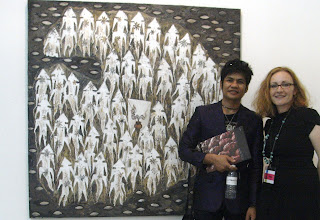 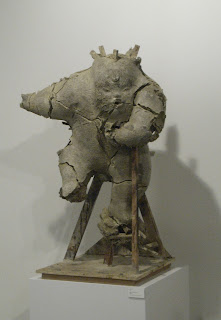 Leong Seckon: The Cambodian artist (represented by Rossi Rossi) has started working on a new series after being evicted from his small studio by the lake. Apparently, the government is filling up the lake with sands. His new works are full of fishes becoming monks, fish skeletons, tears and express his concerns over a disappearing way of life. Seckon is one of the few top contemporary artists in Cambodia who has been making waves internationally. 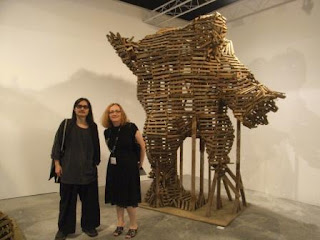 Li Chen: Exploring a new direction in his sculptures, using small pieces of wood which he hopes will “mature over time.” The artist says it’s a new series he’s recently started where he hopes to “represent the passage of time.” Right now he’s still working on a giant 8m tall one which is outdoor so it can “interact with nature.” The rotund shapes of his new sculptures are still instantly recognizable. He’s also done some work using ropes (which I don’t think work as well), and some in clays which have a very interesting distressed look, which exemplifies this passage of time perfectly.