Published - Moviemaking of a Different Sort 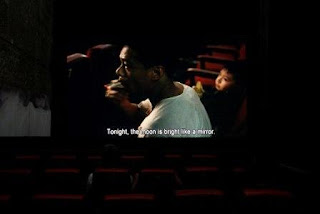 The Malaysian-born, Taiwan-based director Tsai Ming-liang is best known for art house films that depict the slow pace of ordinary lives. But the winner of the Golden Lion at the Venice Film Festival ( “Vive L’Amour,” 1994) and Silver Bears from Berlin (“The River,” 1997; “The Wayward Cloud,” 2005) — who was also named Asian Filmmaker of the Year at the Busan festival last month — is starting to enjoy success in a lesser-known career: that of an installation and video artist. “It’s a Dream,” one such installation by Mr. Tsai that exists in several versions, consists of a video and a few rows of movie theater seats to mimic the atmosphere of an old cinema. The chairs come from “several rows” that he purchased “from an old Malaysian movie theater,” he said through a translator while in Singapore recently. The Taipei Fine Arts Museum acquired has one of the “Dream” installations for its permanent collection and another was shown at the Aichi Triennale 2010 in Japan this year. A third is on display at the Shanghai Biennale, which runs through Jan. 23. Read the whole story in the IHT.