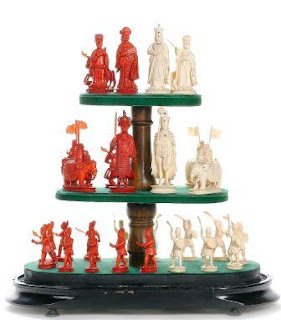 A selection of intricate and varied Chess sets from around the world will be offered by Bonhams in the Chess, Games and Cards sale taking place on January 17th. East versus West can be seen in one of the highlights of the sale from Asia: a Cantonese chess set made in 1820. King George III and Queen Charlotte are represented in the white figures, with bishops as clergy and knights as horsemen, whilst the Chinese Emperor and Empress, with bishops as mandarins and rooks as elephants with flags are represented as the red figures. All the pieces have been mounted with decorative glass “gems” and the set is estimated at £3,000 – 5,000.
From Europe a very rare, there is a 300 year old south German, ivory and ebony figural chess set estimated at £15,000 - £20,000. Made circa 1700, the King and Queen are dressed in 17th -18th century interpretations of mediaeval dress and the pawns are dressed in baggy breeches and flared bottomed coats. Another French ivory “bust” chess set, circa 1780, based on images of the Europeans and Moors is estimated to sell for £7,000-9,000. 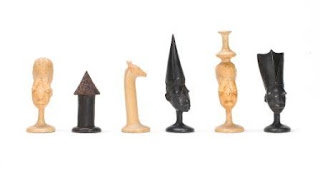 From Africa there is a 1950s Tribal African hardwood chess set from Makondi with the chieftain Kings and Queens bearing cooking pots on their heads and tribal markings on their faces. The unusual ensemble includes the bishops as witch doctors, knights as giraffes, rooks as tribal huts and pawns as tribesmen.

From the Americas, a 20th century Ecuadorian metal, folklore chess set has the Kings represented as Atahualpa, the legendary last King of the Inca Empire and the Queens as his wife, Pacha, complete with lamas for horses.