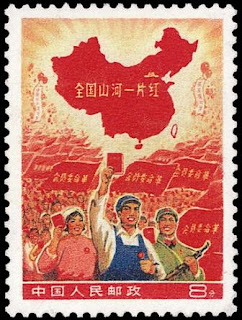 Once banned by Mao Zedong as a bourgeois activity, stamp collecting has become increasingly popular in China in recent years. While early collectors were from Hong Kong, Taiwan, and the international Chinese diaspora, some important Mainland Chinese collectors are today “repatriating” stamps, in the same way that others are bringing back Chinese artworks.

A franked version of a 1968 stamp that Robert Schneider, a principal with the auctioneer InterAsia Auctions in Hong Kong, called “the most iconic stamp of the People’s Republic of China,” sold at auction in August for 345,000 Hong Kong dollars, or about $44,500.
The stamp, titled “The Whole Country is Red,” depicts a group of workers holding Mao’s “Little Red Book,’ with a red map of China in the background. It was pulled from circulation on the day it was issued, however, officially because the map omitted the Xisha and Nansha Islands, although probably a more important omission was Taiwan. Some of the stamps had been sold before the order to pull them came.  Read the whole story in the IHT.