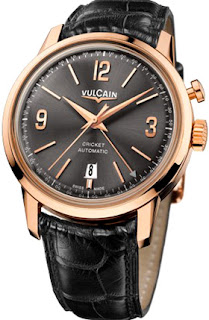 Introduced in 1947, the Vulcain Cricket was the world’s first mechanical alarm wristwatch, with a sound so strident it could wake a heavy sleeper from the deepest slumber. It established Vulcain as an innovative watchmaker and soon the timepiece got endorsements that many watchmakers could only dream about today: several U.S. presidents started wearing it in public. President Harry S. Truman, who had been given one by the White House Press Photographers’ Association in 1953, often praised it and wore it regularly. His successor, President Dwight D. Eisenhower, also wore a Vulcain Cricket, and so did President Lyndon B. Johnson. The watch became known as the Presidents’ watch and was so popular that the Swiss manufacturer churned them out by the thousands and could barely meet demand. Nevertheless, like many other Swiss brands, it fell victim to the rise of Japanese quartz watches in the 1970s and by the mid-1980s, Vulcain and its Cricket had fallen into oblivion after the manufacturer stopped production. It was resurrected in 2002 by Bernard R. Fleury, the founder and chief executive of Production & Marketing Horloger, after he acquired the patent on the Cricket movement. While the Vulcain brand has struggled to regain its place in the heart of U.S. buyers, it has made some headway in Asia, having come up with new technical innovations, like a self-winding alarm movement, and it is the first alarm watch with a flying tourbillon. Now, with a new marketing campaign harking back to its former presidential endorsements, Vulcain is hoping to recover its past glory in the United States. Read the whole story in the IHT.