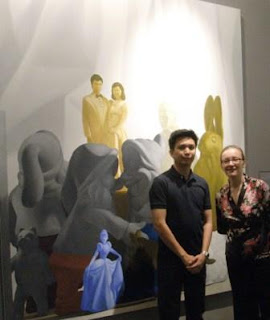 Southeast Asian artists have often found inspiration in the turbulent socio-political environments of their nascent democracies, and the tense political environment in Thailand in recent years has provided plenty of fodder. Natee Utarit is best known for his work questioning the nature of images, in particular photographs, through the medium of painting. But in recent years he, too, has felt the need to comment in subtle ways on his country’s complex political and social landscape.. "I think the recent political context has influenced many artists in Thailand. I cannot deny, it is influencing me,” the 40-year-old artist said last month. “But my work is not really about politics, it’s more about the social changes.”


The clear evolution in Mr. Utarit’s work is now on display in a mid-career retrospective, “Natee Utarit: After Painting,” at the Singapore Art Museum through Feb 20. Mr. Utarit started his career painting abstract works, but he quickly moved toward a representational approach to explore Western established modes of painting, such as figuration, landscape and still life. Behind many of the works are references to historical works by European masters such as Caravaggio, Courbet and Titian. In his “Pictorial Statement” series in 2000, Mr. Utarit superimposed monochromatic paintings of Thai landscape photographs onto exact reproductions of paintings by the Old Masters, establishing a dialogue between the classical masterpieces and photography. His 2005 series “Last Description of the Old Romantic,” features floral still lifes, copied from classical paintings, which he stained to dim their splendor as a reflection on the notion of beauty. 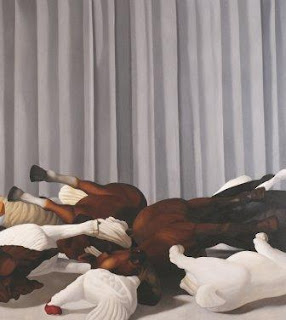 The year 2007 marked a shift in the artist’s practice, as he started using children’s toys to comment on Thai society. In the 2009 painting “Tales of Yesterday, Today and Tomorrow,” he features an arrangement of toys, loosely referencing the complex and enigmatic composition of “Las Meninas,” by Diego Velázquez. The Spanish court characters of Velázquez’s 1656 painting have been replaced with characters well-known in the Thai context, such as the politician or the soldier, Mr. Utarit explained. To reinforce the meaning of the painting, he uses colors that have symbolic meaning for the Thais, such as blue and yellow, which are associated with the king and royalty.

In “The Prince,” painted in 2008, the year former prime minister Thaksin Shinawatra was charged with corruption, Mr. Utarit shows a small toy prince facing the Thai flag, yet with his feet pointing in opposite directions, thereby betraying his actual stance. Next to the toy are two yellow rubber ducks, a visual pun for lame-duck politicians.

Read the whole story in IHT.