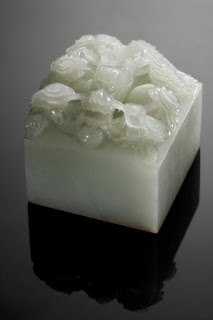 A piece of China’s Imperial history – a seal personally commissioned and used by the Qianlong Emperor (1711-1799) – sold for £2,708,000 at Bonhams. The perfect four centimetre square jade seal bearing the inscription `Zi Qiang Bu Xi’, (‘Self-Strengthening Never Ceases’) is closely linked to the Emperor’s 80th birthday celebration which coincided with the 55th year of his reign and is an iconic reminder of China’s golden age. Apparently no fewer than five curators from the Palace Museum in the Forbidden City, turned out to view it, while the seal was being shown in China. The buyer is from Beijing, but chose to remain anonymous.