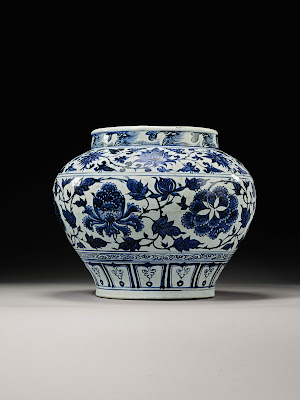 A rare Yuan Dynasty Blue and White 'Peony' Jar, Guan sold for the exceptional sum of $4.1 million at Sotheby's London  more than six times pre-sale expectations.The ‘Peony’ Jar saw competition from four bidders and finally sold to an anonymous buyer on the telephone.In shape, design and painting style, the jar is an archetypal example of the 14th century blue and white porcelain, and represents the final stage of the gradual alteration in proportions of the shape known as guan. The neck is more distinctive, the shoulders broader and the body expanded to make the vessel appear stable and balanced. The dramatic swelling of the body –with the widest part just above the centre – contributes to the powerful profile of this guan shape, and the Yuan guan presented a new aesthetic image with its striking blue and white decorative scheme. The painting on the jar encompasses the most characteristic elements of Yuan porcelain design – the peony scroll, lotus scroll, waves, classic scroll and petal-panels or lappets.