Published - The Minister as Muse 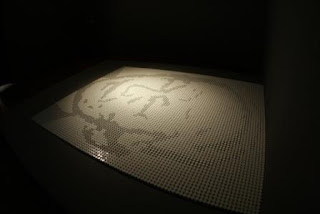 The vibrant watercolor shows a gaming table with three playing cards, each depicting a different portrait of the same man. Small figures kneel at the corners pleading, “Papa, can you help me not be frightened?” and “Papa, don’t you know I have no choice?” They are lyrics from the gay anthem “Papa, Can You Hear Me?” from the Barbra Streisand film Yentl; the man featured on the cards is Lee Kuan Yew, Singapore’s first prime minister, who is often described as a father figure—albeit an authoritarian one—to the young nation. New York–based Singaporean artist Jimmy Ong incorporated the lyrics to reflect the anxieties of a generation of gay men in a city-state where homosexual activity remains a criminal act punishable by up to two years in prison, while the card motif is a nod to the much-debated opening of two casinos earlier this year. Ong’s work is a relatively rare example of a contemporary artist incorporating Lee’s image, even though Lee has dominated Singapore’s political landscape since the young nation’s independence in 1965. Lee stepped down as prime minister in 1990 but has remained involved in government and holds a cabinet position with the title “minister mentor.” His image has the power to evoke strong reactions, yet unlike Mao Zedong, whose image has been embraced by legions of Chinese artists, Lee has remained a distant, often taboo subject for many Singaporean artists. “I can only speculate that it is self--censorship at work,” says Ong. “Even in my artwork I am self--censoring, like using Yentl’s lyrics in place of my own voice.” But just as the 87-year-old Lee has started in recent interviews to contemplate openly his own mortality, some artists are also beginning to reflect on Lee’s life and legacy. Several recent art exhibitions have used his image to explore the notion of nationhood, though never too critically. “Reevaluations are part of anyone’s legacy, but to do so while someone is still in office colors the effort with all the anxiety of politics,” says Jason Wee, a Singaporean artist also based in New York. “Mao is no longer in office, and Lee still is.” Wee has been working on a series of portraits of Lee, using shampoo bottle caps arranged to create a pixelated effect. Titled No More Tears, the portraits are a nod to Lee’s rare emotional moment in 1965, when he cried on television announcing the separation of Singapore from Malaysia and Singapore’s future looked uncertain. Wee has also gone beyond mere iconographic representation, examining how deeply the aging statesman’s influence runs over the city-state’s citizens. In the recent exhibition Beyond LKY at Singapore’s Valentine Willie Fine Art Gallery, artists were asked to reflect on a Singapore without Lee. Wee installed a tall, dark, granite sculpture in the shape of the number one, inscribed with the words IN MEMORY OF MY FATHER, MR. LEE, along with Self-Portrait (Yellow, Green and Red Mr. Lee), an ink portrait in which the artist looks like Lee. “I decided on a self-portrait, but one that shows how little control I have over my genetic, national, and ideological paternity,” says Wee. Others at the exhibition also reflected on Lee’s influence on Singaporeans, positive and negative, though many did not use his iconography. Read the full story in Newsweek.