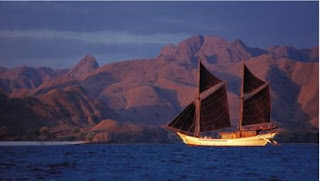 In 1910, Lt. van Steyn van Hensbroek of the Dutch colonial administration in Indonesia, set out in search of the mysterious “land crocodiles” he had heard about. On Komodo island he found not crocodiles but the largest species of monitor lizard surviving from the dinosaur age. Known as Komodo dragons, the reptiles have attracted much interest. Back in the mid 1980s, Komodo island received about 1,140 visitors per year, mostly intrepid backpackers hitching a ride on traditional cargo boats known as pinisi. To guarantee dragon sightings, operators started tethering goats to a site near the beach as bait. By the mid-1990s, the number of visitors had increased 30-fold—but the feedings had become so frequent that the monitor lizards could barely muster the energy to emerge for another gory show. The feedings have stopped as tour operators have come to realize that the island has much more to offer—including an abundance of colorful and exotic marine life that make it one of the world’s best diving spots.  A century after van Hensbroek’s visit, Komodo island is still accessible only by sea, but nowadays roughing it is no longer the only option. The ever-increasing thirst for authentic luxury has created a small cottage industry of pinisi cruises that transport tourists back in time while incorporating today’s latest little luxuries. Read the full Newsweek story here.