A fully articulated iron dragon will be the highlight of the Bonhams Fine Japanese Art sale taking place on November 11 at New Bond Street. The 133cm long creature is estimated at£120,000 – 130,000. 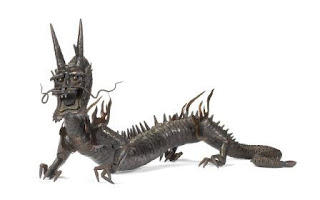 This dragon is a stunning example of jizai okimono, naturalistic, fully articulated iron animal figures, whose bodies and limbs can be moved replicating their counterparts in real life. The dragon offered by Bonhams has a long serpentine and undulating body, forged with numerous scales that have been joined inside the body. The head, mouth, claws and ears are each constructed of moving parts and the leg joints can turn 180 degrees. Although little is known about the origin and development of jizai okimono as works of art, this dragon was created in the Edo Period (18th/19th century) by the Myochin School. Historically, members of the Myochin Family were supreme armour makers and famous for their excellent iron forging and hammer work. However, during the protracted long peaceful Edo period there was less demand for the manufacture of armour and the family used their craftsmanship and expertise to create other objects, including jizai okimono. There are only three of such dragons known to exist that are similar in size and workmanship.