Published - The Traditional Pinisi, and Then Some 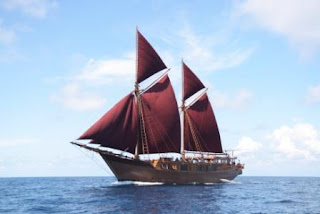 With its long, elegant bowsprit, twin masts, wooden hull and multiple sails, the traditional Indonesian sailing boat known as a pinisi evokes a bygone era. For more than 100 years starting with the middle of the 19th century, these boats, designed and built by the Bugis, a seafaring people originating from the island of Sulawesi, were used to carry cargoes between Indonesia’s 17,000 islands. Following the seasonal monsoon wind patterns they would sail westward for six months before turning back to retrace their passage eastward over the rest of the year. Their design changed little until the mid-1970s, when owners added motors, making changes needed to adapt the hulls to withstand the mechanical vibrations. Around the same time the pointed stern became bigger, wider and higher to accommodate a pilothouse; the mizzenmast, toward the rear of the ship, was often removed altogether while, in some cases, the remaining forward mast was also altered to function as a crane to help load and unload cargoes — just enough sail canvas being kept to allow the boats to continue to qualify for tax breaks available to sailing boat operators.  In recent years, however, the emergence of a luxury yacht-based tourism industry in Southeast Asia, offering cultural or diving trips to exotic islands, such as the Komodo archipelago in Indonesia or the Mergui archipelago off the coast of Myanmar, has encouraged boat-builders in Kalimantan and South Sulawesi to return to making boats with a traditional design aesthetic — even if they also include a motor — to satisfy leisure demands. Read the full International Herald Tribune story .