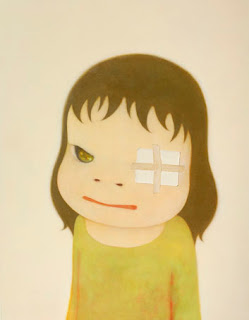 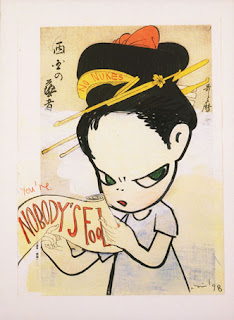 The Asia Society is devoting its entire museum space to a major exhibition of Japanese artist Yoshitomo Nara, one of the most influential Neo Pop artists working today. Born in 1959 in Japan, where he presently lives, Nara is internationally recognized for his work, which has inspired an enormous cult following among youth in Asia. The exhibition is organized into three thematic sections—Isolation, Rebellion and Music. Each section traces, in roughly chronological fashion, the development of Nara’s recurring characters, motifs, and subject matter. Isolation includes paintings, drawings, and sculptures, many of which depict solitary, wide-eyed girls or dogs seemingly deep in thought. Early works from the 1980s are done in a loose style of drawing and painting, and reflect a sense of loneliness that relates to Nara’s own childhood experiences as a “latchkey” child living in the small city of Hirosaki in northern Japan. The paintings of a solitary girl—with an oversized head and large expressive eyes—are minimalistic yet emotionally intense. Another iconic character is a white dog, symbolizing feelings of alienation, a recurring theme in his work. Rebellion features a number of Nara’s intimately scaled drawings with scribbled texts that speak to a range of emotions, from anger and frustration to exuberance. For Nara, drawings are not mere preparatory sketches for his paintings and sculptures; they are a significant daily conceptual exercise and a kind of revelatory diary. Included in this section are paintings depicting angry and defiant children—in different settings and with varied expressions—that may be seen as the artist’s alter egos. The third section, Music, highlights the importance of music to Nara. Music lyrics provide the subtext for many works, and in some cases song names and lyrics are used as titles or are written directly on the drawings.
Asian Art Japanese Art