News -Three Chinese amongst top 10 artists under 30 at auction 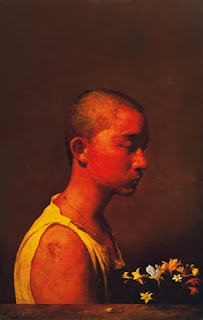 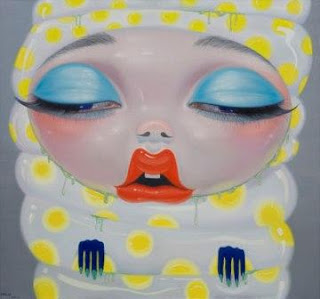 According to Artprice, three Chinese artists are amongst the top ten artists under 30 at auction so far this year. Si Peng appears twice in the top 10, with his Portrait of a man in red (2006) and Portrait of a man in yellow (2006) which sold for respectively $51,359 and $48,791 at Christie’s May sales in Hong Kong (lower than what they had fetched the year before at Poly International Auction Co). Another emerging Chinese artist is Na Yang who holds fifth place in this ranking for her Gold-Coined Hibernation. I wrote about this “me-first” generation artist last year for Newsweek. She’s part of a new wave of artist that were raised in a post-Mao China and influenced by a broader range of media, including the Internet, videogames, Japanese manga and Korean soap operas. Many embrace cartoons, using an imaginary world of cute, simplified characters, often with exaggerated features, clearly influenced by Japanese artist Takashi Murakami. Beijing-based artist Yang Na, 28, paints doll-like, seductive women who resemble avatars in online chat rooms. With out-of-proportion heads, false eyelashes, pouty mouths and perfect porcelain skin, her characters appear sprung from sexual fantasy and convey a message of seduction, but also one of superficiality and emptiness. "These women are a symbol of our era of consumption," Yang explains. "Enveloped in a lifestyle of greed and excessive materialism, these girls look alike. But their interest in the latest fashion masks inner confusion and obsession, a kind of emotion only youth has. Being young means being both perfect and imperfect, gorgeous and sick, happy and despondent." (read the whole story here ).  The third artist is Kao Yu with Love tear gas (2004) and "Ultimate Taste of Capitalism" (2009). The two paintings are characteristic of Kao Yu’s provocative and blood-stained “cartoon” drawings that represent a panda bear (a key figure in his work and a strong symbol of traditional China). Japanese artist Noriko Yamaguchi and Indonesia artist Ariadihtya Pramuhendra are also in the top 10 table.
Asian Art Auctions Chinese art Japanese Art