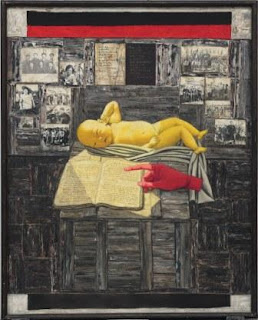 Sotheby’s Contemporary Asian Art Autumn Sale in Hong Kong on October 4 comes with an estimated value of $19 million spread over 217 lots. The highlights is Zhang Xiaogang’s 1992 masterpiece, Chapter of a New Century – Birth of the People’s Republic of China II (Est. $2.69 – $2.94 million), which was the inspiration for his famous Bloodline Series. Incorporating Zhang’s early artistic vocabulary where surrealist motifs are wielded in an expressionist style, the work also embodies the artist’s ruminations on the history and destiny of his nation. The painting portrays a yellow baby resting on folds of white sheets on a wooden casket against a backdrop of historical photos from 20th-century China. In front of the baby is a red hand pointing towards an open book. The white sheets, hand and open book evoke the floating symbols so often found in the works of Spanish Surrealist Salvador Dalí. Juxtaposed against these motifs and photocopies of photographs documenting the founding of the republic, the yellow baby symbolises the rebirth of the Chinese nation.

Another highlight is Zeng Fanzhi’s Masks Series No. 5 (Est. $1.15-1.92 million) of 1994, which dates to the beginning of his signature Mask Series. Two masked men stand together with arms around each other’s shoulders, yet their exposed out-sized hands suggest the futility of their attempt at concealing their real emotions – a metaphor for the spirit of a Chinese generation. Although the men wear red scarves around their necks symbolising China’s past, their jeans and leather belts reveal the influence of Western culture. The artist captures the mood of the early 1990s when China’s economy started to boom, at the same time he delves into the helplessness felt by the Chinese people in the face of rapid changes.

A single-owner sale of 38 lots, belonging to a European collector, will be part of this sale. What makes this collection interesting is the presence of major works by leading Shanghai artists in the 1980s and 90s, who are more attuned to scrutinising urban life compared with their Beijing counterparts. Among these important works are Gaudy Art representative Yu Youhan’s The Waving Mao and, for the first time ever, the complete photo and video masterpiece by Yang Zhenzhong, Light as Fuck I.
Asian Art Auctions Chinese art Sotheby’s