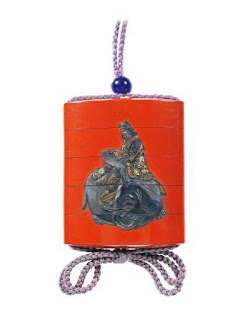 Bonhams will be selling a comprehensive single owner collections of Japanese Gentleman’s accessories on Nov 8 in London. This private collection was formed by the late environmentalist, mountaineer, scholar and collector Edward Wrangham. It comprises over 1000 pieces of inro, netsuke and Japanese sword fittings assembled over many decades. For three centuries inro and netsuke were the Japanese equivalent of the Western status symbols of a gentleman’s top hat or pocket watch. An inro (literally meaning sealed case) is a traditional Japanese case consisting of a stack of small, nested boxes that were used to carry small objects such as seals, tobacco and medicines; the netsuke is a small carving in wood or ivory that keeps the inro securely closed.  Unlike European suited dandies of the 18th and 19th centuries, Japanese men wore traditional Kimono and the inro were worn hanging down from the sash for all to see. After humble beginnings as functional items, between the 17th-19th centuries inro and netsuke were developed by some of Japan’s finest craftsmen into miniature works of art. From the exquisitely decorated lacquer, ivory or gold of the inro case to the intricate and finely sculptured netsuke that allowed the inro to be hung from the Obi (kimono sash), these accessories became expensive works of art. The variety of subjects depicted on inro is remarkable: from flowers, fishes and animals to scenes of everyday life, gods and goddesses and historical scenes and battles. Although these accessories became ever more elaborately crafted, they also stood outside the strict Imperial laws that prohibited the ostentatious display of wealth such as gemstones or jewellery. As a result, the demand for inro and netsuke increased and wearing a high quality inro where materials such as wood, ivory, precious metals, shell and coral were used for exquisite inlay was a sign of wealth and social status. This 19th Century intricate four-case red lacquer inro inlaid in metal with the Japanese Buddist Deity, Fugen Bosatsu on an elephant is estimated at £18,000 – 22,000.