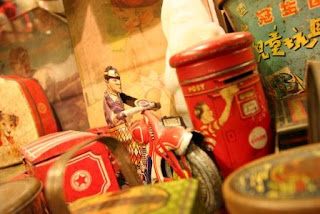 It is such a shame that the Museum of Shanghai Toys, a private museum in Singapore, has had to close down due to financial difficult streaming from the lack of visitors. One of its main problems is that it was never well publicized and its location in Little India was also not ideal. The museum had been set up by a toy enthuse tiast, Marvin Chan who had collected more than 3,000 "made in Shanghai" tin-plate toys dating from 1910s to the 1970s. This niche collecting made the museum truly unique and could have been a real selling point with tourism.
Many tin-plate and celluloid toys from the 1910s to 1940s were made in small quantities and unlike the strong antique collector market for European toys, there are also no real auctions or collectors' markets for China-made toys, even though mainland Chinese are lately showing some interest in their childhood memories.  If toys appeal to one's inner child, they also reflect the social and historical environment of the time when they were made. From Manchu dolls of the 1920s to the Chiang Kai-shek commemorative toys of the 1940s, the "New China" jigsaw puzzles of the 1950s (which incorporate Taiwan) and the Mao's army girl dolls of the Cultural Revolution, the Museum of Shanghai Toys represented an adults' world in miniature, bringing visitors back in time through China's 20th-century history. 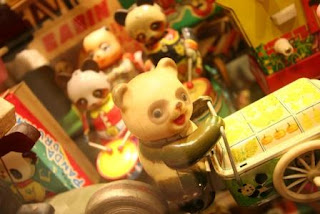 Before 1910, China had had a long history of making traditional folk toys, but while some had great artistic value, they were not very lifelike. Dolls, for example, were made of mud, wood and clay and mainly used as items of burial. China's various national industries began to take shape after the anti-imperialist May Fourth movement in 1919. Patriotic toy makers emerged around Shanghai, including the Hgai Guo (patriotic) Toy Factory, which produced beautiful clockwork, tin-plate warships and tram toys, along with simple tin containers, plates and other objects. Such factories tried to promote Chinese products by adapting and modifying foreign ones, Chan explained. Possibly the most important development for the Chinese toy making industry was the advent of tin manufacturing around Shanghai in the 1920s and 1930s, churning out tin cans for paints, cosmetics, biscuits and sweets. With the opening up of Shanghai to Western influences, Western tin-plate toys became fashionable and a new industry flourished. By 1935, the China Can Company, which had first produced tin cans, had turned its attention to tin-plate toys and was producing toy planes, wind-up tin monkeys and other animals.
During the Japanese invasion of the 1930s, war-related toys such as fighter planes, tanks and soldiers dominated production,. Later on, toys were often used as a propaganda tool. This was especially true during the Cultural Revolution. he rare collection is now going to move to a Shanghai location, which maybe make more sense. Still, a lost for Singapore.
Singapore